Sunderland fans told they CAN'T take over Trafalgar Square again and street drinking is BANNED as police try and avoid repeat of 2014 and 2019 chaos with over 40,000 Mackems set to descend on London for League One Play-off final at Wembley 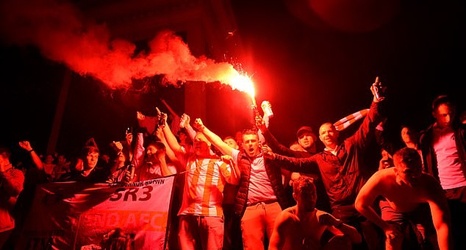 Sunderland fans have been warned they won't be able to take over Trafalgar Square and other parts of central London when over 40,000 descend for Saturday's League One Play-off final.

Previous visits to Wembley by the Mackems in 2014 and 2019 have seen tens of thousands of fans drinking and singing in the streets.

But the Metropolitan Police Football United has warned Sunderland fans - and those following their opponents Wycombe - that street drinking won't be permitted this weekend after Westminster Council took action to prevent it.

They tweeted: 'A warm welcome to travelling Sunderland and Wycombe supporters for this weekend.