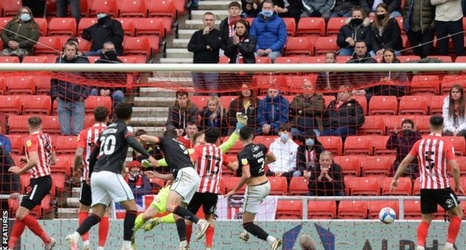 Lincoln City withstood Sunderland's gutsy fightback to reach the League One play-off final in a breathtaking second leg at the Stadium of Light.

The Black Cats trailed 2-0 after the first leg, but Aiden McGeady teed up goals for Ross Stewart and Charlie Wyke to wipe out the lead by the interval.

But the Imps improved immeasurably and, after Regan Poole's header hit the bar, Tom Hopper headed home the vital goal.

Jorge Grant also missed a penalty while McGeady hit the post for the hosts.

Grant's spot-kick was brilliantly saved by keeper Lee Burge, but the miss did not prove costly as Michael Appleton's men held off some persistent late pressure to set up a Wembley date with Blackpool on Sunday, 30 May.