Papa John's Trophy: Premier League under-21 side placed in first round groups 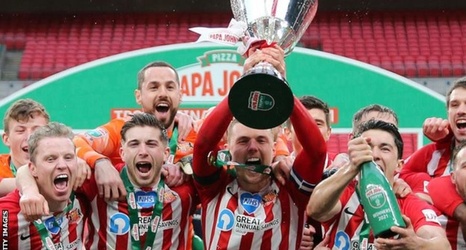 Holders Sunderland have Manchester United's under-21s in their Papa John's Trophy pool after the 16 Premier League development squads were drawn for the group stage of the competition.

Chelsea, who made the semi-finals in 2018, are with Exeter City, Bristol Rovers and Cheltenham Town.

The first games will be played in the week commencing 30 August.

Sixteen teams from the Premier League have under-21 teams in the competition, with the 48 English Football League clubs divided up into north and south regions.

This is to reduce travel time for those clubs involved.

The trophy remains based upon regions until the draw is opened up nationally from the quarter-finals onwards.