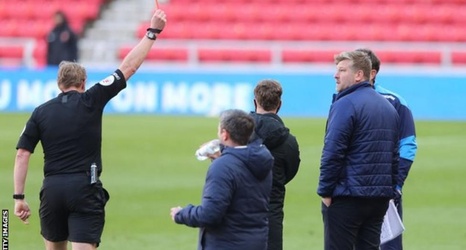 Police were called to the Stadium of Light following claims Oxford United goalkeeper Jack Stevens was headbutted at half-time in the U's 3-1 League One defeat at Sunderland.

"We are waiting for the police to come, one of my goalkeepers was headbutted at half-time," he told BBC Radio Oxford.

It proved a bad-tempered game, with Robinson sent to the stands after Aidan McGeady scored Sunderland's second, while Oxford midfielder Mark Sykes was also sent off for a second yellow card just after the hour.