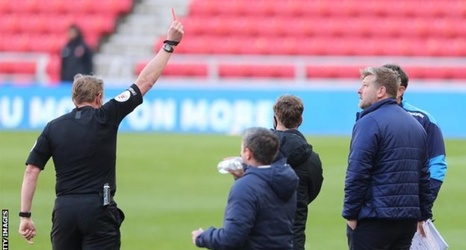 Oxford United manager Karl Robinson has been handed a four-game touchline ban after being found guilty of violent conduct by the Football Association.

Robinson, 40, and Oxford have also been fined for incidents that took place in the U's match at Sunderland on 2 April.

The manager's suspension covers the entirety of the League One play-offs including a potential Wembley final.

Sunderland assistant Jamie McAllister has been suspended for six games, including a three-match stadium ban.

Police were called at half-time of the game after Oxford alleged that keeper Jack Stevens had been headbutted in the tunnel.