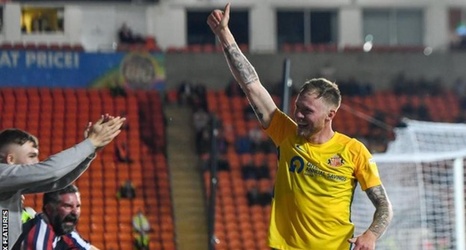 Aiden O'Brien scored a hat-trick as Sunderland beat Blackpool to reach the Carabao Cup third round.

Shayne Lavery sent the hosts ahead when he poked home inside the box after good work from Tyreece John-Jules.

The visitors led when O'Brien's shot deflected in off Daniel Gretarsson before Josh Bowler's late equaliser, but O'Brien slotted in to win the tie.

It was the perfect start for the hosts as Lavery found the net with an impressive finish from a tight angle, however their lead did not last long.