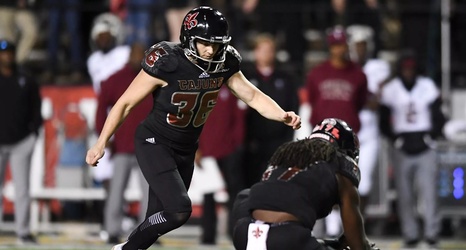 Lafayette, LA - Louisiana Ragin Cajuns senior placekicker Stevie Artigue has been named the Sun Belt Special Teams Player of the Week on Monday, as the league office in New Orleans handed out their weekly honors.

Artigue, a Lafayette native, had another great night in his historical Cajuns career, going 3-3 on field goals, moving him into 3rd on the school’s all-time scoring list. Artigue is the second Louisiana specialist to receive the weekly honor, after Rhys Byrns won the same honor in October after the App State game. Artigue also became the fifth Louisiana player to receive a weekly honor from the conference.