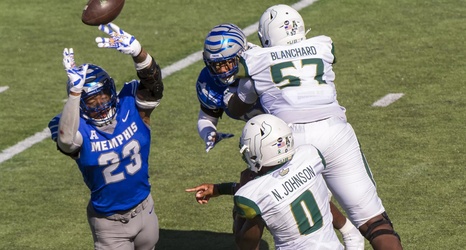 Less than four minutes of game clock separated a program-shaking disaster from a hearty sigh of relief. Things were looking dire for the reigning AAC champions when South Florida sunk a field goal with 4:36 remaining at the Liberty Bowl to secure a 13-point lead.

But this Memphis squad is resilient. This same team erased a 21-point deficit to tie SMU in the second half at the beginning of October. Two weeks later, the Tigers roared back from 21 in the second half to upend UCF. That determination was on full display once again, as Memphis (4-2, 3-2 AAC) scored 14 unanswered points in the final 3:30 to defeat South Florida (1-6, 0-5 AAC), 34-33.