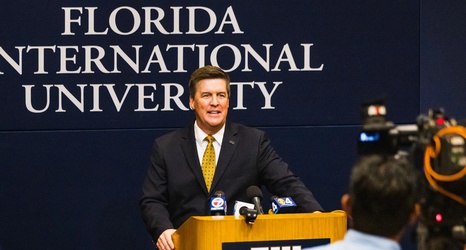 After a tumultuous 2020 and 2021 seasons, FIU football looks to turn the page under new head coach Mike MacIntyre. The former 2016 Coach of the Year joins Joe and Eric to talk about his first few months in Miami, why he believes his team can be competitive immediate despite having lost 16 out of its last 17 games and why the FIU job appealed to him.

Other topics include the ever-evolving transfer portal and what challenges that provides for coaches at the Group of Five level and how the new rules regarding uncapped scholarship limits for the next seasons will help MacIntyre and his staff as they look to rebuild a Panthers roster that has seen over 30 players transfer in the three seasons prior to his arrival.