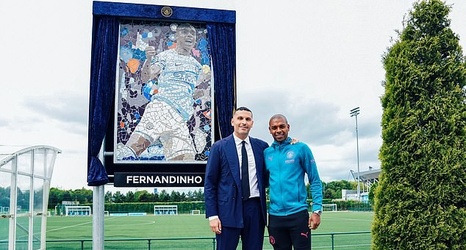 Manchester City have unveiled a gigantic tribute to Fernandinho ahead of his final game against Aston Villa this afternoon.

Fernandinho will call it time on the stories Manchester City at the end of the season when his contract expires and is expected to return to Brazil.

In recognition of his nine years at the club Fernandinho was presented with a mosaic inspired by his goal in City's 7-2 victory over Stoke City in 2017 on Sunday morning.

Fernandinho's goal won the Club’s Goal of the Season award for the 2017-2018 season and will now be remembered at the 80-acre City Football Academy for years to come.