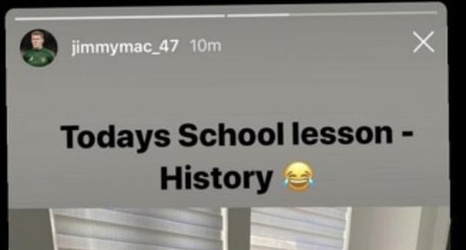 James McClean has attempted to defend his controversial Instagram post in which he appeared to mimic the IRA in a home schooling session with his children.

The Stoke City winger says it was 'supposed to be a lighthearted joke,' but also expressed his regret over the offensive post, in an interview with Sky Sports.

The image depicted the Republic of Ireland international wearing a balaclava in front of his children with the caption: 'Today's school lesson - history' with some laughing emojis. The balaclava was interpreted as an ill-advised reference to the IRA and the Northern Ireland conflict.