Arsenal vs. Stoke a feisty rivalry built on frustration and deep defensive lines 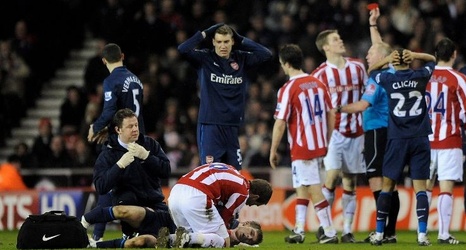 Arsenal versus Stoke City isn't among English football's most historically famous rivalries, but since the Potters' promotion to the Premier League eight years ago, it has become one of the feistiest. The hatred, however, goes back to before the Premier League era.

The rivalry essentially dates back to the early 1970s, when Arsenal and Stoke met in consecutive FA Cup semifinals. Arsenal triumphed in both, and it's become accepted to refer to the two matches as "controversial" wins -- although the truth is slightly more complex.

In 1971, their FA Cup semifinal took place at Hillsborough, with the Potters storming into a two-goal lead within half an hour.