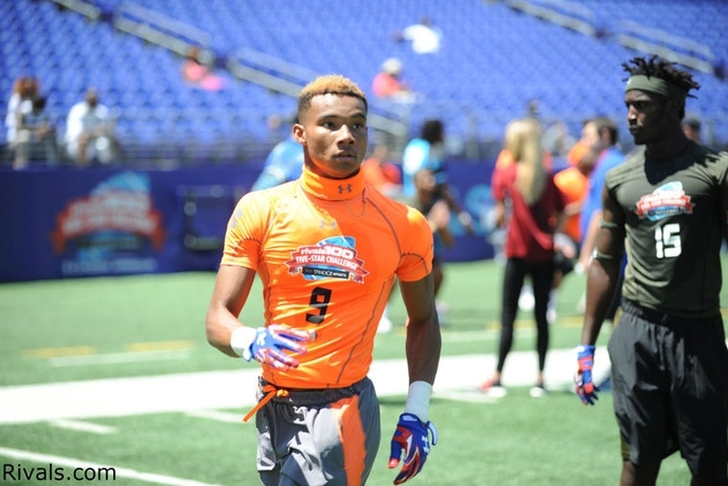 We're in the nitty gritty of the 2016 recruiting cycle, as we head towards the Dead Period and a litany of recruits make their final decisions about their college destinations. That means big things for the Stanford Cardinal, as they look to add more firepower to their current top-five haul. Here's a quick mid-week update from the recruiting trail leading to and from Palo Alto.

The Notre Dame Fighting Irish are currently going all in on five-star Savannah (GA) Prep wide receiver Demetris Robertson, but they still haven't separated in significant fashion from his other three favorites -- Stanford, Alabama and Georgia.

Robertson was considered early to be Robertson's far-and-away leader, but concerns about distance and hard charges by the other teams on his list have mucked things up a bit.

The Cardinal picked up a verbal from three-star McAllen (TX) Memorial running back Trevor Speights on Monday, adding some more pop to the program's #5 overall recruiting class for 2016.

Speights had a phenomenal senior season, rushing for 3,195 yards and 50 touchdowns on 233 carries. He average over 10 yards per carry over the course of his prep career.

Ranked as the #30 running back in the nation by 247Sports, Speights' shiftiness makes him a four-star value despite having a slighter frame at 5-foot-11, 200 pounds.

2016 LB commit Curtis Robinson was upgraded to a five-star ranking by Rivals.com in their second-to-last rankings update for the 2016 recruiting cycle. If he holds his five-star through signing day, he'll be the first linebacker with that star rating to sign with Stanford in the program's history.