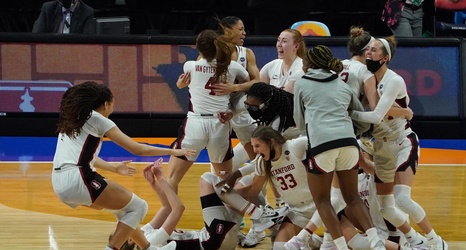 The Stanford Cardinal won their first national championship in women’s basketball in 29 years, after defeating Arizona 54-53 in the 2021 NCAA Tournament Championship on Sunday at the Alamodome in San Antonio, Texas.

Much like their semifinal win over South Carolina, Stanford alternated great play with their opponent, and they had to sweat out a buzzer-beater attempt to win, but they got the job done and Tara VanDerveer now has her third national title as Stanford head coach, in the year she became the all-time wins leader in NCAA women’s basketball.

After a nervous start for the first couple trips to either end, Lexie Hull got the first basket of the game for Stanford, before Aari McDonald buried a 3-pointer on the next possession for Arizona.