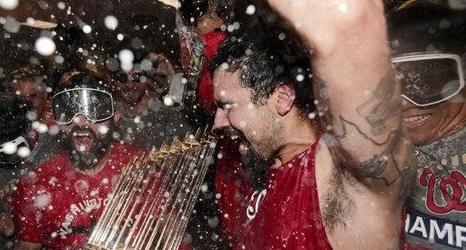 Washington Nationals third baseman Anthony Rendon and Adam Eaton celebrate in the locker room after Game 7 of the World Series against the Houston Astros on Wednesday, Oct. 30, 2019, in Houston. The Nationals won 6-2 to win the Series, but it wasn't a ratings bonanza for Fox. (AP Photo/David J. Phillip)

Washington's conquering of Houston in seven games pulled the event from what could have been the lowest-rated Series on record, but increased audiences for Games 6 and 7 as the drama built only elevated the matchup to being the second-worst rated.

That's because the second game was the lowest-rated Game 2 on record, and the same held true for the fourth and fifth contests.