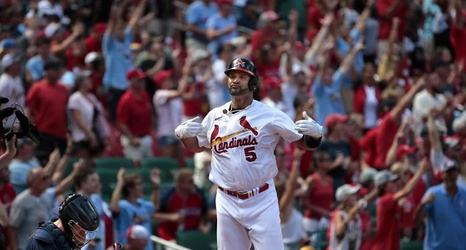 Hours before he hit two home runs and punctuated an emphatic victory, Cardinals great Albert Pujols gave a young, struggling teammate a tip, leading to the homer that changed the game.

During a hitters’ meeting early Sunday morning, Pujols drew from his previous at-bats against Milwaukee reliever Taylor Rogers, including an eight-pitch strikeout Saturday. Five of the eight pitches Pujols saw were Rogers’ slider. He told his teammates, including Dylan Carlson, how Rogers used the slider, how it moved and the spot to look for it as a pitch to drive.

“He’s aggressive with it,” Carlson recalled.