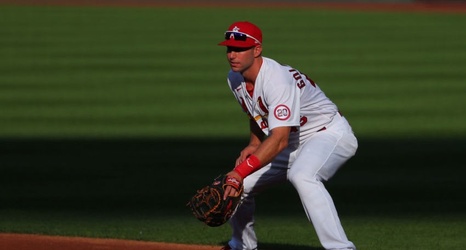 ST LOUIS, MO - SEPTEMBER 25: Paul Goldschmidt #46 of the St. Louis Cardinals waits for the pitch to be delivered against the Milwaukee Brewers in the third inning during game one of a doubleheader at Busch Stadium on September 25, 2020 in St Louis, Missouri. (Photo by Dilip Vishwanat/Getty Images)

The St. Louis Cardinals are a defense-first team. Unsurprisingly, they have three players that have been nominated for a Gold Glove.

It is no secret, the St. Louis Cardinals‘ strength is pitching and defense. They aren’t known for their offense, but their defense was first in the MLB by Defensive Runs Saved in 2020.