Simmons has a blast at Fantasy Camp 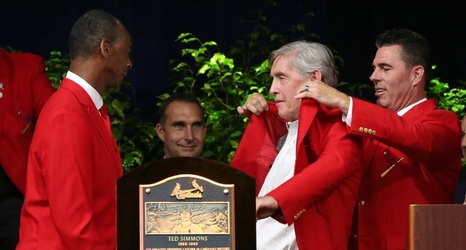 JUPITER, FLA. — On July 26 in Cooperstown, N.Y., former Cardinals star catcher Ted Simmons will join the best of the best at the Hall of Fame induction ceremonies. But last week in Jupiter, Fla., the team he managed in the Cardinals’ Fantasy Camp competition was the worst of the worst. And Simmons could not have cared less.

Although his club was outscored by 60-some runs in seven consecutive defeats, Simmons had almost as much fun as he will have this summer.

“If you stay in baseball or have been in it as long as I have been in my life,” said the 70-year-old Simmons, “you realize after seeing every level that when you see people who are a long, long way from the pinnacle and they’re competing, they’re playing within themselves as hard as anybody plays — even the guys at the pinnacle.