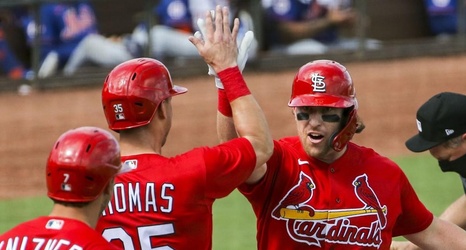 JUPITER, Fla.—The Cardinals’ projected five-man rotation shrank to three with the news that lefthander Kwang Hyun Kim’s back stiffened three days ago, near the end of a bullpen session while he was preparing for what would have been his start Saturday night here against the Miami Marlins.

Daniel Ponce de Leon received that start instead and made mostly a favorable impression. Ponce de Leon threw a Cardinals spring-high 68 pitches as he left the game having blanked the Miami Marlins into the fourth inning. A two-out wild pitch by reliever Roel Ramirez allowed a run to score but Ponce de Leon otherwise pitched around four hits, a walk and a hit batsman.