If Yadier Molina has a play, pitchers get out of the way - A Hunt and Peck 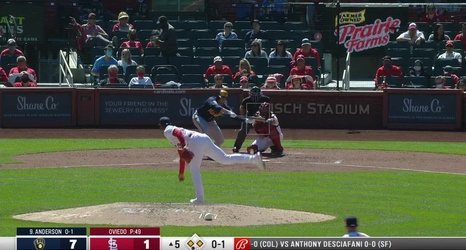 Cardinals rookie Johan Oviedo learned a valuable lesson during the Cardinals game against the Brewers on Sunday. Down 7-1in the fifth inning, Oviedo faced a one-out situation with runners at first and third. Brewers pitcher Brett Anderson laid down a bunt, but didn’t get it far enough away from Yadier Molina. Molina pounced and immediately threw a bullet to Paul DeJong at second base to start a double play. Oviedo got an up-close and personal look at Molina’s throw — a little closer than he probably preferred.