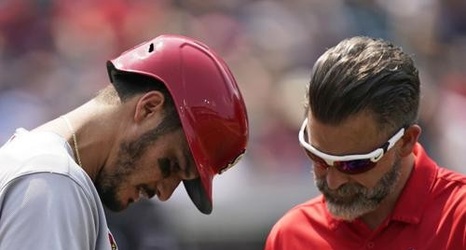 St. Louis Cardinals' Nolan Arenado, left, and a trainer look at Arenado's hand after being hit by a pitch in the fifth inning of a baseball game, Wednesday, July 28, 2021, in Cleveland. (AP Photo/Tony Dejak)

CLEVELAND — The bruise near his right elbow and stinging sensation spiraling from there to his fingers made it difficult for the Cardinals' Nolan Arenado to throw, and forced him from Wednesday’s game in the middle of the fourth inning.

The club and their third baseman are “optimistic” he’ll be able to return Friday after the soreness calms and that numb, prickly feeling recedes.