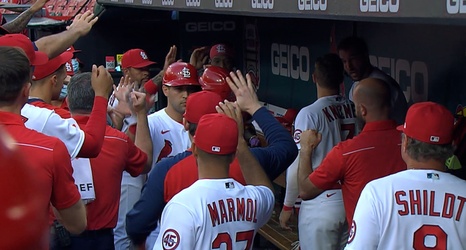 The Cardinals started a four-game series with the New York Mets in St. Louis on Monday night, looking to extend their four-game winning streak. Adam Wainwright got the start against Joey Lucchesi, and while both pitchers got roughed up early in the game (the head-scratching intentional walk to load the bases in the second certainly didn’t help Wainwright), Wainwright managed to settle in and pitch five and two-thirds. Conversely, Lucchesi was run out of the game in the third inning as the Cards’ offense put up six runs, five of which came in that third frame.

Jeff McNeil led off the game for the Mets and grounded an 0-2 sinker to Paul Goldschmidt, who took it to first himself for the first out.