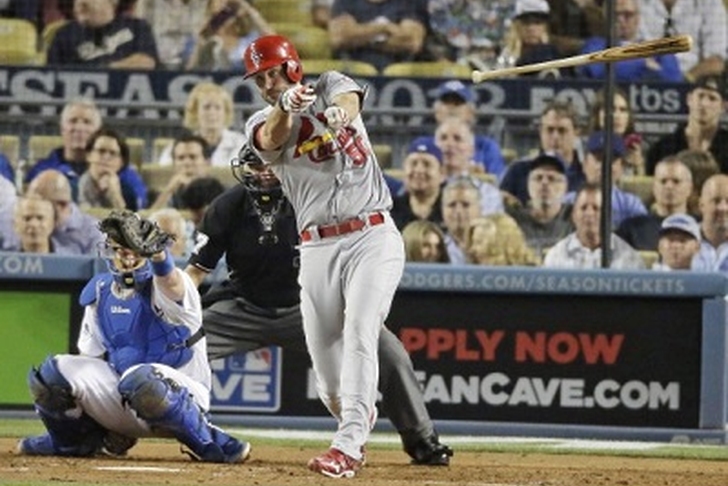 Carlos Beltran couldn't do it all by himself in Los Angeles tonight, and it became obvious just how the Cardinals have depended on him to carry the offense in this third game of the 2013 NLCS.

Beltran went 0 for 3 with a walk as part of a four-hit, zero run night for St. Louis at the plate. Coming into the game, Beltran was leading the Cardinals in postseason RBI by a wide margin, having driven in nine of St. Louis' 22 playoff runs.

The Cardinals' best scoring chance in game three against Dodgers' starter Hyun-Jin Ryu came in the top of the fifth inning. Back-to-back singles to lead off the inning by David Freese and Matt Adams were followed by Jon Jay hitting into a double play and Pete Kozma grounding out.

St. Louis failed to get runners on base in front of Beltran tonight and it became obvious that no one else in that lineup could come up with the big hit when it was needed. This is no surprise, as going into tonight's game, with runners in scoring position so far this postseason, all Cardinal hitters besides Beltran are a combined three for 30. That's an average of .100. After tonight's game, that average has now dropped to 0.097.

If this seems familiar, it's because the Cardinal offense was just as pathetic in last year's NLCS after the first four games. St. Louis scored just one run and had a sub-100 average with runners in scoring position in the last three games of that series against the San Francisco Giants. Ten of the 15 players that registered an at-bat with runners in scoring position in the 2012 NLCS are on this year's NLCS roster for St. Louis.

The key to beating St. Louis for Los Angeles is clear. Don't allow any base runners in front of Beltran and then just collect the outs when the rest of the Cardinals' lineup serves them up.