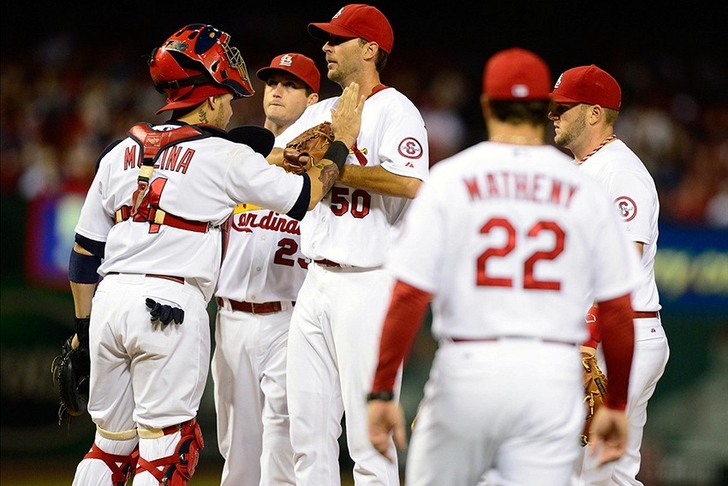 Prior to the season, many picked St. Louis to once again represent the National League in the World Series, and they were expected to build a significant lead in the NL Central by the quarter-mark of the season.

We're a little bit past that quarter-mark now, and while the young Cardinals haven’t fallen victim to their sky-high expectations, they haven’t quite dominated like the experts thought they would.

At 24-21, the Cardinals are second in their division behind the surprising Brewers, and while they’ve spent much of the first part of the season flirting with a .500 record, they’ve picked it up a bit in the last week.

The Cardinals are 6-2 in their last eight games, while Milwaukee has lost four straight.

While most Cardinals fans are used to fast starts, their slow beginning to the 2014 season shouldn’t have fans doubting this year’s squad. GM John Mozeliak understands this best, saying that while the Cards’ overall play is concerning considering the group they have, it isn’t time to panic.

Most people believed that the Cardinals' uncharacteristic power outage –i.e. lack of homeruns – in 2013 was a major fluke, and that the additions of Jhonny Peralta and big boy Matt Adams to the everyday lineup would restore the power, so to speak.

The only problem is that hasn't yet been the case.

Peralta, the Cardinals' biggest offseason acquisition, is the only one who’s delivered, hitting nine long balls so far. That’s a good number and all, but it’s five more than any other player on the team. Once again, they find themselves near the bottom of the league (29th to be exact) with only 25 homers on the season. The 28th ranked team – the Rangers – have 30.

Panic time? Not quite yet.

What the Cardinals lack in full power they make up for in regular displays of semi-power; doubles, that is. St. Louis ranks sixth in the big leagues with 86 doubles, only one behind the next team up, Detroit. Extra-base hits sans home runs have been their calling card in 2014.

While an inconsistent offense and an extended slow start by Allen Craig has plagued the Cardinals early on, fans should remember that much of the offense is now relying on young players. For the first time since many Cardinals fans can remember, there isn’t a superstar slugger – Pujols, Beltran, etc. – who strikes shear terror in the opposing batters. The closest the Cardinals have to that these days is Molina.

Carpenter and Craig have shown nothing but offensive prowess in their short major league careers, so many are perplexed by their relatively sluggish starts to 2014.

@birdsonthebat13 Everyone has a hit in the lineup except Allen Craig. Not the first time I've said that this year. #frustrating — Michael Bertram (@MLBert3) May 21, 2014

They have thus far in their careers shown to have a talent in consistency - Carpenter's MVP-worthy 2013 campaign and Craig's otherworldly RISP numbers - so what if they have a down year? Many star ballplayers do, only to bounce back the next season after tweaking their mechanics.

Lower run totals in 2014’s early going have been unexpected given what many an analyst call "the National League’s deepest lineup" in St. Louis, but as most of the group is made up of new additions and young players playing out their full first seasons, there’s no reason to think the offensive slump will last. In fact, it’s already showing signs of breaking out.

Dominant pitching is keeping St. Louis in the thick of it

If there's one reason why the Cardinals aren't 10 games under .500 at this point, it’s their pitching staff.

St. Louis is dominating with a rotation that ranks sixth in the National League in ERA (3.31), fourth in strikeouts (375), and second in opponent batting average (.233). Staff ace Adam Wainwright is leading the charge as youngsters Michael Wacha and Shelby Miller live up to high expectations, with all three pitchers sporting a sub-2.85 ERA.

There have already been opportunities for the Cardinals to show off their pitching depth, with Jaime Garcia going down in Spring Training and his replacement, Joe Kelly, out indefinitely with a hamstring injury. The third candidate for the fifth spot, Tyler Lyons, has performed well in his first few big league starts, falling victim only to lack of run support and a bad outing against Chicago.

The scary thing is that the Cardinals' pitching is only going to get better, not only in the long-term as Wacha and Miller continue to develop, but immediately as well. Garcia returned on Sunday and pitched well over seven innings, and fan favorite Jason Motte is finally back after missing all of 2013 due to Tommy John surgery. His arm will be a welcome addition to a bullpen which has an overworked Trevor Rosenthal, among other young hurlers.

And who isn’t afraid of Wainwright? After tossing his first career one-hitter last night in yet another complete game shutout gem – words assocated many times with Waino – he now ranks second National League ERA, boasting a sterling 1.85 earned run average. Wainwright has once again established himself as a pitcher to be feared after recovering from Tommy John  surgery in 2011.

He is considered by many to be a frontrunner for the NL Cy Young, and rightfully so.

Tonight was Adam Wainwright's 1st career one-hitter. He now has 8 career shutouts and 18 career complete games. #STLCards — The Birds On The Bat (@birdsonthebat13) May 21, 2014

It has become evident that the 2014 Cardinals will go as far as their pitchers will take them. Matheny will face some decisions by year’s end concerning the innings count of his young pitchers, especially with this year’s Tommy John epidemic.

The Cardinals are in it for the long haul

Matheny has stated that his club is still searching for its identity. They may have found it in their last few games, but if not, Cardinals fans shouldn’t fret. If they don’t make the Fall Classic this October, they are set for years to come, led by Wacha, Miller, Kolten Wong, and talent still waiting in the wings by the name of Oscar Taveras.

Mozeliak will indicate when, if ever, it’s time to push the panic button. For now, with Wong’s improvement following his minor league stint, Motte’s return, and Wainwright’s dominance, the Cardinals look to be just fine.