What The St. Louis Cardinals Can Expect From Michael Wacha In Five Years 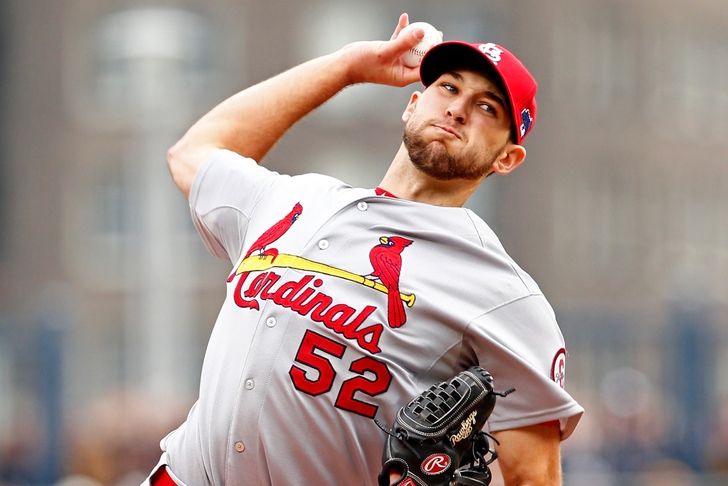 The curtain has dropped on a memorable 2013 baseball season, and The Cardinal Way has again proved to be as successful a system as any in professional sports, as the Redbirds made their second World Series appearance in three years, and came darn near close to winning it. If you witnessed any of the Cardinals’ postseason play, you more than likely noticed a carousel of dominant youthful pitching, and may have even experienced side effects of disbelief, amazement, and/or envy if you happen to be a fan of any of 29 other particular teams.

But out of that grouping which has St. Louis in contention for years to come, one stands apart from the rest. You may know him as the breakout star who had no business embarrassing almost every hitter he faced. The Pirates and Dodgers know him as a pitcher they would rather not have to face again. Residents of The Gateway City might refer to him as a youngster who displays veteran presence and ability on the mound, reminding them of some guys by the name of Chris Carpenter, Adam Wainwright, or even Bob Gibson.

All this in a span of less than two years, mind you.

If you’ve heard of his accomplishments, you’ve probably also heard his name, Michael Wacha. Not that you’ll forget it soon; the postseason was practically his exam to secure a spot in the Cardinals’ rotation for 2014 and beyond, and he passed with flying colors. With the National League preparing for a full regular season of Wacha mania, there are some things we should come to expect from the soon-to-be Cardinals co-ace in the coming years, if his October dominance was any indication.

He will be with the Cardinals.

Cardinals GM John Mozeliak has expressed intention in shopping young rotation anchors Shelby Miller and Lance Lynn this offseason in order to fill the team’s few holes. But Wacha? Think again, rival GMs. The postseason proved that pitching and defense wins championships, and that lack thereof ends with an early trip home. With NL Cy Young finalist Adam Wainwright locked in for several more seasons as ace of the staff, having Wacha right behind provides one of the best 1-2 punches in major league baseball, in terms of starting pitching. The organization has shown a particular strength in developing young pitchers to be eventual names on a Hall of Fame ballot. That’s the scariest thing about Wacha. He still has much to learn.

The Cardinals fanbase made their appreciation and adoration of Wacha known in his postseason starts at home. They recognize that he leads a new wave of young, talented pitching which already has the Cardinals among the favorites to represent the National League next fall, along with the Dodgers. Wacha knows he has a chance to become a household name among the best fans in baseball, along with the potential to become an icon of the franchise. It is perfectly fine that no one in the organization has suggested trading him, because chances are he doesn’t have a particular desire to leave.

[caption id="attachment_296" align="aligncenter" width="609" caption="Wacha would finally lose his first postseason start on the biggest stage, but not before completing a historic October run."]

He’ll have thrown a no-hitter. Or two. Or three.

The fact that this is not only likely to happen, but likely to happen soon, is an attribute to Wacha’s (very) early career success. With only a handful of starts to begin his professional career, Wacha started against a potent Washington Nationals lineup in late September and came one out away from throwing a no-no. His performance earned him a spot on the Cardinals postseason roster, where he almost replicated the feet.

In his first postseason start against the upstart Pirates, he again pitched with control and deep into the game, only to give up the first hit of the game in the eighth inning. That would be the only knock Pittsburgh would put on the board. He would continue to pitch with confidence and authority in the second game of the NLDS and in both of his NCLS starts. A thought would begin to ripple through the baseball world. "This isn't supposed to be happening in the postseason, not to mention by a rookie who was playing college ball in the spring of last year." It would take the eventual champion Red Sox a second time facing him to figure him out.

From his 2013 stats (regular season and postseason), a 2014 full season projection looks at him having about a 3.78 ERA in 195 IP with about a 13-11 record. Numbers like those are respectable for any starter with very little time in the minors, and those projections are with a slight regression in his productivity. Although the possibility is there that Mike Matheny pulls a Steven Strasburg and shuts him down early, Wacha will still undoubtedly hit a peak of dominance sometime during the summer, by which the baseball world will be paying close attention for his becoming one of the youngest to throw a no-hitter, and why not? He has unfinished business.

The youngster has all the tools to do it already, and with no remorse. He also has proven to have the intangible characteristics of an elite pitcher; the traits that aren’t measured in stats but in desire and the fire from within. Wacha has demonstrated that, and he will have a full spring with the 2014 Cardinals team to oil the machine and learn more about how to break the hearts of opposing hitter.

It won’t hurt that he’ll have Wainwright, Carpenter, and Molina to mentor him.

He will win a Cy Young.

If there was a Cy Young award just for the postseason, Wacha would have locked it up after only two of his October starts. The accolade is certainly not out of the question for him to become the first Cardinal to win the designation of best pitcher in the National League since Carpenter in 2005. Tim Lincecum and Clayton Kershaw have shown that it can be done within one’s first few seasons in The Show, and multiple times at that; Lincecum won in 2008 and 2009, Kershaw in 2011 and most likely this year, barring one of the biggest upsets in major league history.

As many a baseball analyst, as well as Wacha’s teammates, have noted during his historic run, Wacha has the all-encompassing, rare trait reserved for legends which goes by the name of “it”. Whatever your definition of “it” is in relation to Gibson-esque pitching in the big leagues, Wacha seems to have it. He is young, but he displays the mound presence of a veteran competing for his fifth ring. He is relatively inexperienced, but his postseason play proved he prefers to thrive on pressure rather than succumb to it. He will be playing his first full season next year, but he might just be in contention for the Cy Young.

He has already beaten Clayton Kershaw, a Cy Young perennial virtually every season, twice in his minimal big league experience. Perhaps it was a precursor to beating him in the minds of award voters as well? Only two pitchers in St. Louis’ storied franchise have won pitching’s most prestigious award. Wacha has got what it takes to be the third. He has “it”.