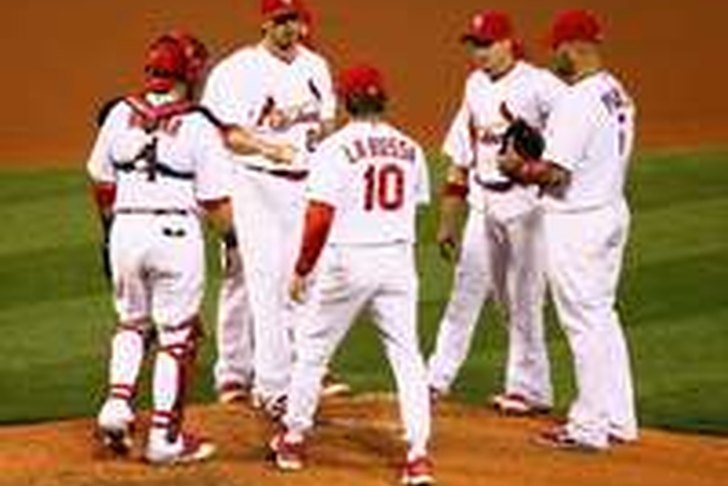 With the smoke from the fireworks in Boston residing after a disappointing championship series, the St. Louis Cardinals now must approach the offseason and the circus that is known as "free agency."

St. Louis is in very good shape, personnel-wise, as they boast one of deepest, most talented farm systems in the league.

The Cardinals benefited from the vastness of their prospects this year in order to deal with the health issues that plagued their starting pitching. However, there are several key personnel questions that the Cardinals need to answer.

Question #1: What to do with Carlos Beltran?

The Cardinals signed outfielder Carlos Beltran prior to the start of the 2012 campaign. Since joining the club, Beltran has led the team in homers in consecutive seasons. Two deep postseasons ensued for the veteran slugger, but so far he's failed to attain his first World Series ring.

Answer 2: Oscar Taveras is currently the top prospect in the Cardinals farm system, and he was set to make his big league debut this year. He was sidelined with an injury, and we didn't get a chance to see him in action this year. Perhaps this will be the year that we will get to see what the scouts have been raving about.

Answer 3: Resigning Carlos Beltran would be a pivotal signing for the Cardinals this offseason, helping the Cardinals sustain what's left of the power hitters in their lineup. This would be the best option because it would give the Cardinals some cushion on deciding this personnel issue. I'm sure Beltran will see some suitors trying to lure him away from St. Louis at the expense of a draft choice.

Answer 1: The Red Sox have extended a qualifying offer to Drew to play for one more season in Boston. If St. Louis could acquire Drew, he would be able to step in and make an immediate impact in the Cardinals lineup in a spot where Pete Kozma and Daniel Descalso have been lacking offensively. Right now, this move is very improbable, but Cardinals' brass should be looking at its potential.

Answer 2: The Detroit Tigers haven't shown much interest in resigning Jhonny Peralta. This would be an odd jump for Cardinals and is probably the least likely answer. Peralta sported an average of .303 last season in light of being punished for use of PEDs. Peralta isn't as defensively sound as Kozma or Descalso, but he could be a phenomenal improvement at the plate, almost doubling Kozma and Descalso's production.

Answer 3: There are a few different ways the Cardinals could shift their lineup to cover the position in 2014. It could even be a position that the Cardinals play by committee. General Manager John Mozeliak has shown interest in INF Kolten Wong, and he's mentioned expanding the role of Wong into an everyday player. Matt Carpenter isn't going anywhere, so could this be a future double play tandem for the Cardinals?

A trade wouldn't be too farfetched for the acquisition of a shortstop. The Cardinals could even turn to a team like the Cleveland Indians or the Baltimore Orioles to make a deal for either Asdrubal Cabrera or JJ Hardy with the amount of quality surplus pitching the Cardinals have at their disposal.

Question #3: What do the Cardinals do with the surplus of pitchers?

St. Louis had to reluctantly throw some young arms this year due to injuries to starting pitchers Chris Carpenter and Jaime Garcia. These arms responded amazingly well, and one of those rookies, Michael Wacha, actually won the MVP in the NLCS where he outdueled Cy Young candidate, Clayton Kershaw. The Cardinals have a Cy Young candidate of their own in Adam Wainwright, and if there is one thing this organization can feel good about, its pitching. With that being said, what do you do with all of it?

The answer is simple: deal it or develop it.

The Cardinals declined the option to bring back RHP Jake Westbrook because they don't require his services with the discovery of this plethora of outstanding young pitchers. Shelby Miller preformed as well as expected an is a candidate for the Rookie of the Year in the National League. Joe Kelly has been a consistent cornerstone of this young rotation that honestly has nowhere to go, except up.

So the question that the Cardinals' front office must face is how they want to utilize all of this pitching. The Cardinals could trade some of their young arms for another potential power hitter to add to the line up, or they could develop this pitching for years down the road. This will be an interesting theme to see played out, and I honestly don't think they can go wrong with either decision. It will also be interesting to see who will emerge as the Cardinals' closer for next year as Jason Motte, Edward Mujica, and Trevor Rosenthal all present viable options.

As the Cardinals face these personnel questions that will shape the organization going into 2014, it is important for Cardinals fans to realize how much better shape their team is going into the offseason versus other clubs in Major League Baseball.