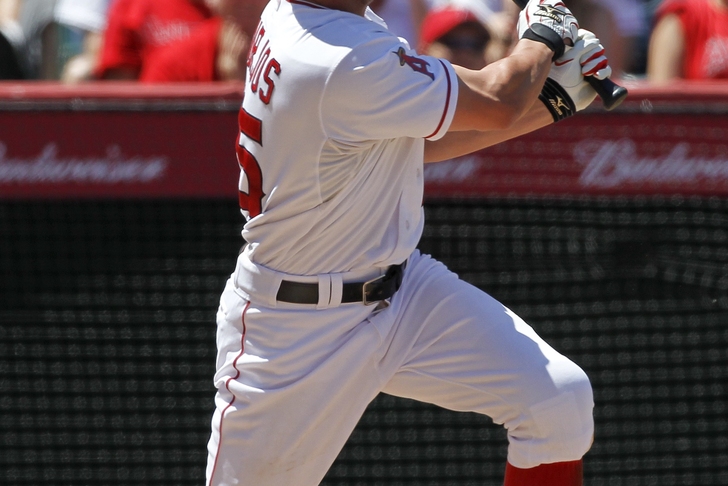 Just two days after the first major blockbuster deal of this baseball offseason between the Rangers and Tigers, the Cardinals have made a splash of their own, acquiring young outfielder Peter Bourjos from the Los Angeles Angels of Anaheim for third baseman David Freese. Questions are abound amongst the best fans in baseball immediately following the trade. Who is Bourjos and what does he bring to the table? Are there other names involved in the trade? What does Bourjos in St. Louis mean for stagnating outfielder Jon Jay? St. Louis is no doubt gloomy about seeing their beloved hometown hero from the 2011 postseason head west, but there is also no doubt that this trade is a win-win for both ballclubs.

Bourjos may seem like a low-key ballplayer at first glance at the stat sheet. He may have even prompted some members of the Cardinal fanbase to ask “Who is this guy anyway?” To answer that question simply: a young, speedy defender with huge offensive potential. Also, someone who will most likely end Jon Jay’s playing time with the Cardinals as soon as he flies in.

The 26-year-old outfielder who has played 354 games for the Angels over four years has admittedly been playing in the shadow of a couple other Angels players you might have heard of, including some young talent whose name is synonymous with a freshwater fish. He comes to a team which has lacked speed in the outfield as of late, with 33-year-old slugger Matt Holliday in left and 36-year-old Carlos Beltran in right.

Experience breeds productivity, and the Cardinals committed the fewest errors in the National League in 2013, but their defense can be above-average with some added speed. Jon Jay has been the component at center for a few years now, but his defense heavily outweighs his below-average play at the plate. He’s recorded some memorable outs for the Cardinals over the years, but was never in line for any Baseball Tonight Web Gems. Bourjos, meanwhile? See for yourself:

So, by all indication, Jay is on his way out for the Cardinals, unless the Cardinals choose to keep him as a backup.

Bourjos not only reenergizes the Cardinals defensively, he also allows for flexibility in the outfield. If Beltran and the Cardinals decide they don’t desire to part ways yet (hey, it could happen), they could split time in a variety of ways, along with top prospect Oscar Taveras, who is going to make his major league debut in early 2014, make no mistake about that. The Cardinals would have an array of options; Bourjos in center with Beltran in right, Oscar in center with Beltran in right, Bourjos in center with Taveras in right…imagine that. Two young and talented defenders with Web Gem potential in the outfield as well as the ability to get big hits in the outfield. That along should have rival NL teams shaking in fear at the news of this acquisition.

As far as his hitting prowess, Bourjos has a .251 average with an OPS at .704. Certainly not numbers which put him in line for Silver Slugger, but there is still much time to carve out his batting abilities and strength. He did tie for first in AL triples in 2011 with 11, so the potential is absolutely there. As far as the lineup goes, he would fit in any of the 5-8 spots, a stretch in the lineup which was inconsistent for the Cards in 2013, certainly when compared to the top of the lineup, inhabited by doubles-machine Carpenter, RBI-machine Craig, and slugging machine Holliday. Bourjos could be just what the Cardinals need in the lineup, in centerfield, and in a clubhouse already full of youth and potential.

The Positives of Sending Freese Away

As far as October performances go, make no mistake that Freese’s 2011 postseason run was one of the best ever. Who can forget the Game 6, after all?

Freese has remained a Cardinals favorite since those heroics, but that is precisely the reason Cards GM Mozeliak decided to send him away – he hasn’t been up to par offensively since he helped St. Louis to their 11th World Series title. He has done an excellent job reminding the baseball world of the magic of the sport every time he steps to the plate, but the good feelings tended to end after his walkup. In 2013 he never quite found his groove, batting just .262 with a sharp drop in power; 20 homers in 2012 to just 9 in the past season. The Angels needed a third baseman with pop, though, and Freese provides just that:

Angels third baseman hit only eight homers in 2013. Even if Freese replicates his relatively weak 2013 numbers, it would be more productivity than they have been getting at the position.

One reason Freese has underperformed since his MVP-caliber postseason was probably that he felt he needed to replicate those numbers constantly for fans who came to expect that out of him. As ESPN’s Buster Olney reports, he won’t have that kind of pressure in Anaheim:

Friends of David Freese say it'll be a good thing for him to play somewhere other than in his hometown,which has been overwhelming at times.

Freese should make an impact with an already talented Angels team, and, as much as St. Louis is sad to see him go, Anaheim’s fanbase should come to love him just as much. He is practically Mr. October III.

As far as how his departure affects the Cardinals infield, it plays a huge part in putting together the defensive puzzle for the 2014 season at beyond. St. Louis can now move Carpenter to third and make Kolten Wong a regular at second. An answer at shortstop is still needed, but make no mistake that Mozeliak is as close to constructing another contender as A-Rod is from being banished from baseball.

[caption id="attachment_373" align="aligncenter" width="400" caption="Freese has been a source of nostalgia for Cardinals fans during the last two seasons, but not much else as far as contributions to his team."]

In addition to Freese and Bourjos switching leagues, St. Louis is sending RHP Fernando Salas west as well, while the Angels organization added minor leaguer Randal Grichuk to the outfield package. Salas appeared in 27 games for the Cardinals in 2013 and didn’t have as much of an impact as when he pitched during their 2011 World Series run. The best farm system in baseball boasts an abundance of young talented pitching, and so that has made Salas expendable. Grichuk, meanwhile, was a 2009 first-rounder for the Angels, a 22-year-old who batted .256 with 22 homers in AA ball in 2013. It is very possible that the Cardinals see the offensively capable Grichuk as an eventual replacement for Matt Holliday within five years.

The Cardinals' trade with the Angels, arguably the most impactful of the offseason besides Rangers-Tigers a few days back, is a bonafide win-win for not only both teams, but for all players involved. Freese and Bourjos look to make an immediate impact for their new ballclubs who need their talents; the Angels look to make their first serious postseason run in several years, and the Cards have put themselves in the position to maintain consistency as far as playing deep into October goes. Perhaps Freese will be reunited with the Cardinals in a postseason matchup in the not too distant future.