The Logistics Behind Sending Troy Tulowitzki to the St. Louis Cardinals 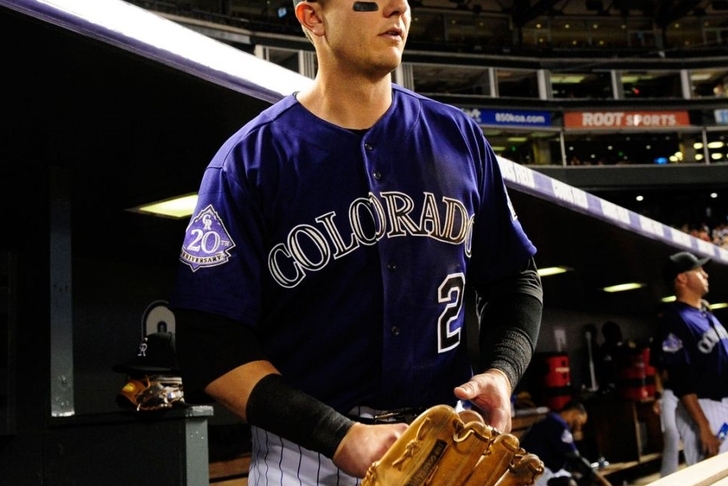 This week, Major League Baseball's general managers will meet. Potential trades will be discussed. Numbers and figures will be obsessed over. Players will be moved and the baseball landscape will be altered. It’s no secret that the St. Louis Cardinals’ one major concern in the offseason is finding a shortstop to replace the horrendous offensive numbers Pete Kozma and Daniel Descalso combined for in 2013, while the Colorado Rockies wish to add a substantial amount of talent to their core and improve their chances of contending, or at least to get them out of the NL West basement.

While such a trade has the potential to be both mutually beneficial and franchise altering for both National League organizations, it is unlikely to happen. The Rockies willfully parting ways with their star player would be similar to a pizza fanatic vowing never to go to Pizza Hut ever again. The Rockies love the pizza they have in Tulowitzki, and why not? His offensive prowess comes with a side order of Gold Glove-caliber defense. Exhibit A:

The Cardinals, meanwhile, would most likely be unwilling to trade away multiple components of essentially their future for one player who has a history of time on the DL. Granted, they have a surplus of pitching and hitting in their farm system, universally regarded as the best in baseball, but such a move would be risky.

Now that we’ve gotten past what would keep Tulowitzki from heading to The Gateway City, let’s look at the components of such a trade should it happen.

Because we all know baseball is about as unpredictable as a team going from last place in their division to winning the Fall Classic.

St. Louis trades a few fish from an ocean of prospects

The Cardinals’ young talent, whether already in the big leagues or up-and-coming, has them loaded for years. If you haven’t realized that yet, you haven’t been paying attention to baseball, or you are a fan of a rival team dreading the Redbirds’ potential. Not only will they have an abundance of monetary resources following the departures of Chris Carpenter, Carlos Beltran, Jake Westbrook, and others, but their numerous pitching and hitting prospects in the minors give them many carrots to tempt other GMs with.

The Rockies would no doubt ask for a substantial amount in the event that they do send Tulowitzki east, including, but not limited to, a young pitcher capable of frontlining a rotation, a power bat to replace that of the retired Todd Helton’s, and a prospect or two. The Cardinals would easily fulfill that request, sending either Shelby Miller or Lance Lynn, both of who are being shopped by John Mozeliak, west, as well as youngster Matt Adams, who practically hits home runs like you and I sway a fly. The Cardinals have the deep-as-the-Grand-Canyon AL-style lineup and more than the requisite number of potential starters for not only next year, but beyond. They could very easily grant the wishes of Rockies’ upper management, along with whatever financial resources they ask for.

But would the Cardinals be willing to take a risk?

Tulowitzki’s play isn’t exactly dangerous enough to the degree where it merits him having a collection of casts and crutches, but it is a well-known fact that he has played more than 150 games only twice in his eight year career, and only 173 over the past two seasons. The Cardinals would retain Kozma as a backup shortstop if need be, as his defensive capabilities are efficient, and Tulowitzki would be an offensive force in a lineup bursting with offensive forces. He would complete them; the only hole left would be Freese if he continues his downward trend. Losing Adams would be particularly hurtful to the Cards, as he plays the first base position well and virtually is a one-man bench for the Redbirds. They already have an effective plan in place for rotating positions to give players rest and maintaining a big bat off the bench; acquiring Tulowitzki would require them to rethink their defensive plans.

[caption id="attachment_317" align="aligncenter" width="600" caption="Slugger Matt Adams could be a Rockie next season should Tulowitzki head to St. Louis "]

What Tulo brings to the table

Say the Rockies are willing to part with their delicious pizza, and St. Louis is willing to give them what they ask for. What do the Cardinals get in return?

Well, depending on how consistent his health will be, he would be the best possible upgrade for a position that was the worst in the league for the Cards. Tulowitzki brings defensive capability worthy of a number of Baseball Tonight Web Gems. Since his debut in 2006, the 29-year-old has amassed two gold gloves and three All Star appearances, setting the bar for the shortstop position in the process. While the Cardinals were efficient on defense in 2013, committing the least amount of errors in the National League with 75, their number of defensive runs saved was below average. Tulowitzki can take them from efficient to elite. He is capable of shooting adrenaline into a slower-than-average defense, making plays when he has the opportunity to do so, embarrassing baserunners in the process.

In addition, Tulo offers what Kozma and Descalso could not in the 2013 season: a bat. He has the potential to be an integral part of a lineup that will almost certainly lose Carlos Beltran. In eight big league seasons, he has compiled a .295 average, hitting 155 long balls. That’s certainly a good amount, considering the games he’s missed. The numbers could be a lot higher, especially with the offensively feared Cardinals. He would bring a power bat to a lineup that experienced a mysterious absence of homer-hitting in 2013. An imaginary Cardinal lineup could see him batting in the cleanup spot, with prolific hitters Carpenter, Holliday, and Craig on base for him to bring in. Can you say a hundred RBIs?

Tulowitzki also brings World Series experience, albeit at a minimum. In his first full season on the team, he assisted the Rockies in making it to the 2007 Fall Classic, where they were swept by Boston. They have had a tough time just being able to play in October since then. Tulowitzki no doubt wants multiple more shots, and so playing for the Cardinals, a perennial contender every year, would in turn also inject new life into him as a player and teammate. He would be reunited with ex-Rockie Holliday and would have the opportunity to be an elite player for St. Louis, should they be willing to send a good part of their future West. It all depends on how much the Cardinals want some superb pizza.