The Legacy of Chris Carpenter 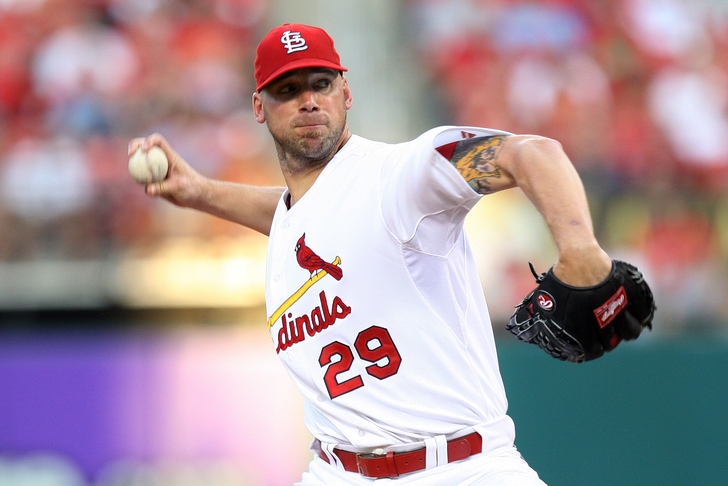 It’s hard to describe what Chris Carpenter meant to the St. Louis Cardinal fanbase without witnessing what he contributed to the team in his prime.

Seldom can an athlete retire whom fans can call humble leader, a fierce competitor, and a gentle teammate, all in one. Even though spectators aren’t in the clubhouse experiencing his personality firsthand, it was easy to see what kind of ballplayer Carpenter was. One full of heart, the kind of heart that America’s Favorite Pastime (and make no mistake, it still holds that distinction) prides itself to have as its foundation.

Carpenter isn’t just a sure-to-be Cooperstown inductee, he will most likely be a unanimous choice for a spot in the National Baseball Hall of Fame. He wasn’t just the greatest Cardinal pitcher of the past decade, he’s one of the greatest in St. Louis’ storied history, right up there with Bob Gibson.

Yes, he meant that much to the city and its fanbase, one who already idolizes Musial and Ozzie, Gibson and Edmonds. Seeing Chris Carpenter off the mound is akin to seeing Elway in the press box, Shaq at the analyst’s table. It will be unusual, maybe even painful at first, but a thank you is in order for the exhilarating play and superior sportsmanship he contributed not only to Cardinals baseball, but to the sports as a whole.

A Game to Remember and to Be Remembered By

2011 NLDS Game 5. Cardinals at Phillies. Carpenter vs. Halladay. Any Cardinal fan could recite to you the specifics of that game, including the final score of 1-0. They could probably also describe with articulate detail and exuberant excitement the emotions they experienced immediately following.

Phillies fans? Probably not so much.

It was one of the games to remember in an October that was full of games to remember for St. Louis. Heck, any hardcore baseball fan would remember that game. It was one of those that didn’t just live up to the hype, it exceeded it. The storylines were aplenty, as were the predictions. The Phillies had to win this game. The had dominated all season after all, led by their pitching. This October would be World Series Champions or bust.

St. Louis had no business being in this game, let alone this postseason. 11.5 games out of the wild card at the end of August. The team seemingly falling apart at the seams. A historic comeback coupled with a historic Atlanta Braves collapse. A historic final night of the regular season.

Aha, starting to remember it now, huh? Let’s fill in the rest of the blanks.

A pitching matchup for the ages. A heavily favored Phillies club against an underdog for the ages. A squirrel scampering out into the ballpark. A hit which will most likely go down as the biggest RBI double of Skip Schumaker’s major league career. An outcome with a score almost everyone expected, but with a victor almost no one was ready to bet on.

That Game 5 will probably go down as the career highpoint for Chris Carpenter, and that includes a career with a Cy Young and an NL ERA crown. The thing about that Game 5 is that it showed with extreme accuracy the type of player who Carpenter was. He was more than willing to step up the challenge, excited but poised to do all he can to take his team to the NLCS.

This writer remembers where he was when Carpenter pitched the game of his life, as do most Cardinals fans. I remember my reaction, as well. Elation, disbelief, amazement. Just part of a collective passion which swept over the St. Louis Cardinals fanbase on October 7, 2011. Carpenter was one of the many postseason heroes of that year, willingly and efficiently putting the team on his shoulders to take them further into a historic postseason run. The thing that separated him from others is that that kind of domination is exactly what people came to expect of him.

[caption id="attachment_381" align="aligncenter" width="300" caption="Carpenter's complete-game dominance in Game 5 of the 2011 NLDS will go down as one of the greatest all-time performances from the mound."]

A Personification of The Cardinal Way

Due to the Cardinals’ recent success – which can be summed up with the fact that they very nearly became the first team to make back-to-back-to-back World Series appearances since the Yankees from 1998-2001 – in October, discussion of The Cardinal Way, the intangible “order of things” and mindset by which Cardinals major and minor leaguers go about preparing and playing the game, has been revived.

Every player that goes through the Cardinals’ farm system (which is one of the hottest commodities in sports today, let alone baseball) seems to have their own definition of what The Cardinal Way really is. For minor leaguers going through Memphis, Springfield, and elsewhere playing and waiting for their big opportunity in the form of a major league call-up, they seem to understand more than most that their talents might be needed at any time in St. Louis, and they must be ready for the opportunity.

For those on the Cardinals’ roster? Well recently, as most of the baseball world already knows, The Cardinal Way for them has been synonymous in recent years with the words “Never back down.” Or “Don’t quit”. Or “It ain’t over till it’s over.” Or any combination of words and phrases you’d like to describe their unreal tendency to emerge victorious when their backs are against the wall.

Whatever your idea is of The Cardinal Way, Chris Carpenter personifies it as a baseball player and as a person. Even though he didn’t take a trip through the Redbirds’ minor league system (he was acquired from the Blue Jays in the early 2000s), Carpenter became the pitching face of the franchise and was at the front of the staff for almost a decade, doing so with class.

In addition to the many accolades Carpenter received during his tenure with St. Louis – including a Cy Young, three All Star appearances, and two-time World Series Champion – Carpenter also possessed many of the intangible characteristics of what made him such a respected pitcher throughout the big leagues. He led in the clubhouse, he commanded on the mound, he respected the media and competition in front of the cameras.

An exceptional athlete can be remembered in multiple ways, including being revered as having much talent but not much poise when things are going awry, or by being praised as a figure who consoled himself and his teammates in rough stretches of play.

Carpenter was always on the top tier of the latter category.

Yes, Carpenter never quit, never backed down in the face of adversity, as can be shown by his willingness to do every kind of rehabilitation that existed following issues with the shoulder of his throwing arm.

He didn’t do all that work for himself, to get back into Cy Young-form in his late 30s; no, that was never a priority. He did it so that he could contribute whatever he had left in him to help his team, even if it was one or two relief appearances. Carpenter already had a Comeback Player of the Year honor to his name. Only fate and a tired arm kept him from working towards a second.

Chris Carpenter, in a sense, is one of the last remaining pieces of the very fruitful LaRussa Era in St. Louis. He didn’t choose to go out with the great Tony following the 2011 historic Championship run, neither did he desire to be traded as Matheny arrived to fill managerial duties. He was fine with assisting in the transition. He was content with remaining in place to do whatever he can to compete for the club.

That is the reason Carpenter is a prime living and breathing example of the concept that is The Cardinal Way. That is how he should be remembered, and that is why the Cardinals fanbase owes him a thank you bigger than the Arch, now, and for all the years to come.