St. Louis is Doing Things Its Way and Losing 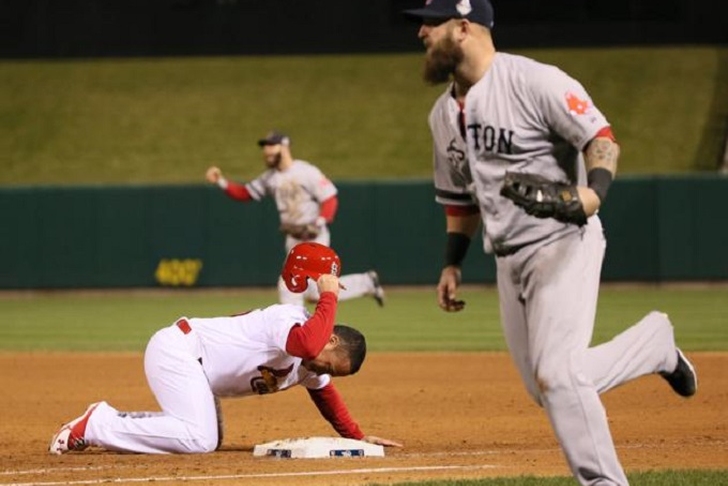 Last night's decision to keep starting pitcher Adam Wainwright in to face Jacoby Ellsbury in the top of the 7th is the best on the diamond example of the St. Louis Cardinals' commitment to doing things a certain way. It's doing things that way that is going to cost them this World Series.

Wainwright was sitting at 105 pitches and had just given up a single, a walk and a double to allow the Red Sox to take a 2-1 lead. Plenty of arms were available in the St. Louis bullpen.

Yet, manager Mike Matheny, "liked the fact that he had a couple of strikeouts and a pop‑up in the previous three at‑bats, and liked the way he was going about it to get us out of that." The only problem with Matheny's logic is that in baseball, previous success is no guarantee of future performance, as was again proven last night.

If you really want a good look at how pervasive this attitude that things will go St. Louis' way simply because of the name on the front of the jersey, it's only necessary to read all of Matheny's post-game comments. His words drip with the arrogance that has come to characterize this team.

When asked about Jon Lester's re-dominance of the Cardinal lineup, Matheny said, "he was the same pitcher that we saw last time. And we had a good approach. Once again I thought we took some better at‑bats here than last time."

Lester's Game One and Game Five lines are nearly identical. While St. Louis did manage to get a run off him last night, they couldn't do something they did do in Game One--get Lester to issue a free pass. Save for Matt Holliday's long ball, the at-bats weren't actually better last night for St. Louis. They were worse.

When Matheny was asked about the prospects of needing to win two games in a row in Boston, the spin was even more ridiculous.

"You know, our guys have been backed up against the wall before, and this is something that isn't foreign to them. They know what we have to do...they have to lock arms, trust each other and play the game the right way," Matheny said.

Perhaps Matheny was referring to facing elimination in the 2013 NLDS in Pittsburgh or the 2012 NLDS in Washington or the 2011 World Series in Texas. Maybe it was all of the above. Either way, Matheny is conveniently selectively remembering. There was also the 2012 NLCS that St. Louis couldn't win during this stretch.

If "playing the game the right way" means things like the decision to leave Wainwright in, believing that at-bats were better despite what the actual numbers say and assuming that comebacks are going to happen simply because they are the Cardinals, then Boston had better get the champagne ready for tomorrow night.