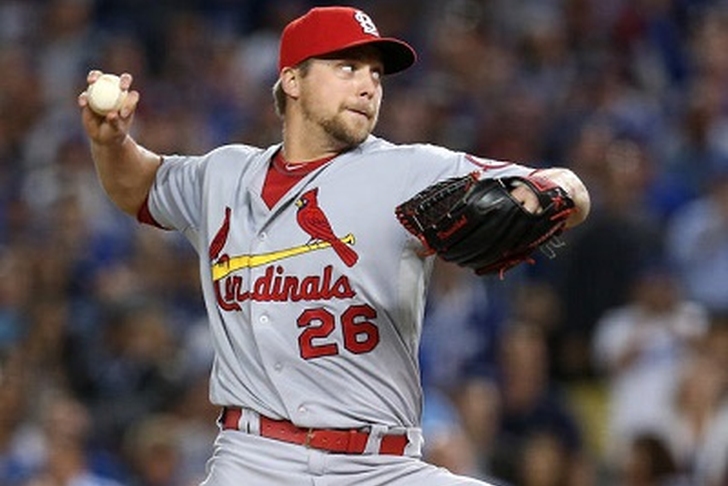 The St. Louis Cardinals have now lost four consecutive potential NLCS series-clinching games and in all four of the losses, bad pitching has been largely to blame for the opposition staying alive.

In these four games, from tonight going back to Game 5 of the 2012 NLCS against the San Francisco Giants, St. Louis' pitching staff has allowed 26 runs on 39 hits. Those 39 hits have included six home runs, five doubles and a triple.

The St. Louis pitching staff in these four games have a combined ERA of 6.50. The fact that St. Louis got the result it got tonight shouldn't have surprised them. Joe Kelly pitched in two of those games last year against the Giants. Of the pitchers that are on the roster for this series, Lance Lynn and Trevor Rosenthal also were the victims of the Giants' hit parade in 2012.

While St. Louis hasn't officially named a starter for Friday night's Game Six yet, all expectations are that it will be Michael Wacha. In Wacha's first start of this series, he shutout the Dodgers over 6 2/3 innings. This is very similar to where St. Louis was last year going into Game Six.

Chris Carpenter took the mound for the Cardinals in Game Six of the 2012 NLCS, coming off starting Game Two, just like Wacha. While Wacha's Game Two this year was a vast improvement over Carpenter's Game Two in 2012, the unmistakable omen for St. Louis is there nonetheless.

If the Dodgers are able to push this streak for St. Louis onto five games with a win Friday night, the potential matchup on Saturday for Game Seven would again be a walk down memory lane. Adam Wainwright would most likely start for the Cardinals, who was the starter in Game Three of this series. Last year, Kyle Lohse started both games three and seven.

The one difference that must be noted going forward in this series is that last year games six and seven were played in San Francisco. This year the Cardinals will have two chances to advance by winning a game in St. Louis.

Tonight was a continuation of an emerging trend for the Cardinals. They are able to pitch well enough to get into position to win the NLCS but not well enough to actually close it out.