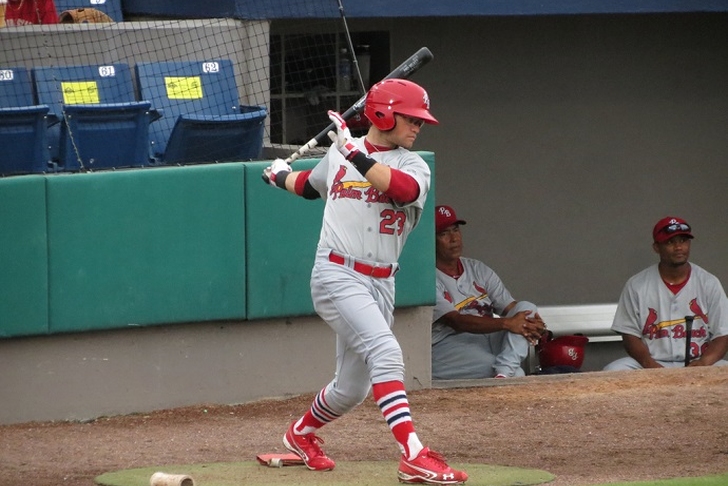 One of the positions besides pitcher that the St. Louis Cardinals are most well-stocked at in their farm system is the outfield. It's because of players like James Ramsey that St. Louis has been willing to let Carlos Beltran walk in free agency. The future for St. Louis is more cost-effective and far younger.

Ramsey is the closest to being major-league ready for the Cardinals of all its outfield prospects. The 23-year old from Alpharetta, GA made it to Triple-A Memphis right before the end of last season, playing most of his season with Double-A Springfield.

In 93 games last season for the Springfield Cardinals Ramsey hit .251 and drove in 44 runs with 15 homers. Ramsey also successfully converted eight out of 12 stolen base attempts and drew 53 walks.

Ramsey will likely be given more time at the Triple-A level to develop by St. Louis. Barring major injuries, the Cardinals should be set in their corner outfield spots with Matt Holliday and Allen Craig. Ramsey is not a centerfield prospect and won't figure into any position battle in that spot.

If Ramsey develops into the player that St. Louis hopes that he will, he may serve the Cardinals better as part of a trade package than in right field. Craig was just given a contract extension last season by St. Louis, so Ramsey's chances of deposing Craig as long as Craig remains healthy are slim.

Ramsey getting his average up near .300 consistently in Triple-A and cutting down on his strikeouts (121 total last season) will give St. Louis a valuable trade piece that they can use to address more pressing needs. If the Cardinals decide to hang onto him, he could give St. Louis good depth at the corner outfield spots.