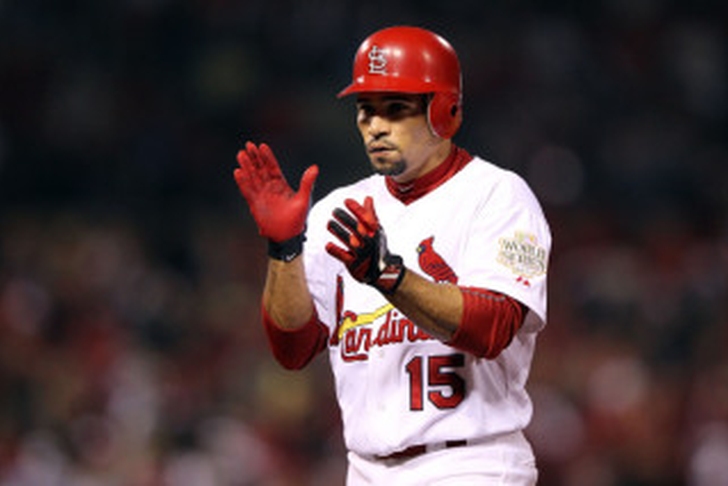 Middle infield has not been an image of consistency for the Cardinals over the past several seasons, particularly at the shortstop position. In fact, opening day has seen a new player at shortstop each year since 2007. Since the departure of David Eckstein after the 2007 season, the position has become a carousel of mediocre players. First it was Cesar Izturis, then Khalil Greene, followed by Brendan Ryan, and finally Ryan Theriot in 2011.

Then something finally changed in St. Louis. John Mozeliak pulled the trigger on a trade that brought Rafael Furcal to the “Show-Me State”. Furcal was a former rookie of the year and had appeared in multiple all-star games before coming to St. Louis. He was a pivotal player in the Cardinals pursuit of the 2011 World Series. When he was inked to a two year contract during the offseason, Cardinal fans breathed a sigh of relief. There would finally be some consistency at shortstop.

Furcal only fed that theory when he got off to a blazing start in 2012 that earned him the starting spot at the all-star game. Then his health began to break down. First it was back spasms, then it was arm pain, and finally there was the ligament damage to the elbow that ended Furcal’s season. The future of the shortstop is now up in the air once again. With the 2012 season all wrapped up, what should Cardinal fans expect at shortstop going into 2013?

Going into 2013, the Cardinals have three legitimate options currently on their roster to take the starting spot at shortstop. The aforementioned Rafael Furcal will compete for the job along with Pete Kozma and Daniel Descalso. How about we take a look at what all three of these players have to offer to the team.

Furcal is undoubtedly the preferred starter of the three. He is head and shoulders above the other two at the plate after posting a .264 batting average and .325 on-base percentage in 2012. In addition, he is quite possibly the best option defensively also as he exhibits good range and a rocket of an arm. He has even shown a bit of speed on the bases with his 12 steals last season.

Although Furcal is the best option, injuries will quite possibly keep him off the field. At 35, he is entering the final stages of his career and his body is beginning to break down. He will certainly be the starter if he is healthy next spring. However, that is a big if.

Pete Kozma made a name for himself when he stepped in for Furcal late last season. In his limited time with the team, he hit .333 with a .569 slugging percentage and drove home 14 runs in only 26 games. He also won many fans over with some clutch hitting both down the stretch and in the postseason that helped propel the team to the NLCS.

Although he put up some nice statistics this past year, one must not overlook the Kozma we saw in 2011 who hit a measly .176 with a .235 slugging percentage. In addition, Kozma proved he was a liability defensively throughout the playoffs with multiple errors. Kozma can be a good depth player, but can he be an everyday guy for the Cardinals? The real question is whether or not Kozma will continue to overachieve, or once again become the disappointing prospect he has been over the last several years.

Descalso is the wild card of the group. He is currently the starter across the bag at second base. However, if Mike Matheny decides to go with Skip Schumaker or top prospect Kolten Wong at second, things could get interesting.

Descalso is not exactly a premier middle infielder, but he is good with the glove as he has exhibited above average range and the ability to make great plays. At times he has shown the ability to be a decent hitter, however his .227 batting average in 2012 will not do. He did hit .264 in 2011, so it is quite possible that 2012 was just a down year. Whether or not he is at second or shortstop, the Cardinals will be looking for a better year out of Descalso as he will be the starter somewhere.

The fourth option for the Cardinals is to look for a shortstop via free agency. A couple names the Cardinals may want to consider this offseason are Stephen Drew and Marco Scutaro. Drew was once considered a premier shortstop in the MLB, but injuries have derailed his career the last couple of seasons. Drew is a .265 career hitter who has also demonstrated a bit of pop with 77 home runs. The Cardinals seem to have a knack for resurrecting players’ careers. Carlos Beltran and Lance Berkman are two examples of that. Drew could very well be an option for the Cardinals for the right price.

Unlike Drew, Scutaro is a veteran who is coming off an amazing postseason, which Cardinal fans got to see first-hand. Scutaro is a .276 career hitter and a sure-handed middle infielder. However, at 37, Scutaro is only a short term answer as he will most likely be retiring before too long. In addition, he will be a pricy option coming off his impressive season, which could take the Cardinals out of the equation.

Trading for a shortstop is also a very realistic option for the Redbirds. Rumors have already begun to circulate involving Asdrubal Cabrera of the Indians going to the Cardinals. A few other shortstops besides Cabrera are on the block as well. With the deep minor league system the Cardinals possess, they could very well be a player in the trading market.

However, the Redbirds have a pretty unique situation at shortstop which may limit their willingness to trade. Nobody really knows whether or not Furcal will be ready going into 2013. Assume the Cards trade for a tier two shortstop using one of their better prospects, and then Furcal is ready to start in 2013. If that scenario played out, the Cardinals would be wasting a prospect and around $5 million a year on a bench player. Mozeliak is usually unwilling to take such risks in a trade.

With everything considered, I would expect to see Furcal lining up at shortstop on opening day in 2013. Furcal should be healthy enough to be the starter next year, but the same cannot be said for the rest of the season.

Seeing as the Cardinals have multiple arbitration eligible players this offseason, I do not expect them to be much of a player in free agency other than a couple of depth signings. In addition, I would not expect a trade due to the risks it entails. Therefore, you can probably expect Matheny to go with Kozma at shortstop for a while if Furcal goes down.

However, I believe that by the end of the 2013 season we will see Descalso at shortstop as Kolten Wong emerges as an option at second base. Barring a major drop-off by Descalso, that combination could very well be the middle infield of the future for the Cardinals.