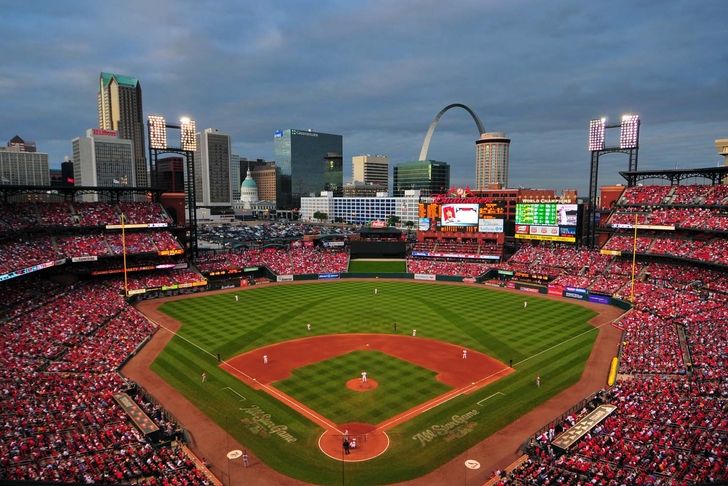 Starting Monday, the St. Louis Cardinals and Kansas City Royals clash in a four-game, home-and-home renewal of one of the best regional rivalries in all of baseball - the I-70 Series.

The Cardinals come in scuffling, having lost four of their last five to fall four games behind the division-leading Milwaukee Brewers in the N.L. Central.

The Royals are facing struggles of their own right now, losing six of eight to fall to the basement of a suddenly competitive American League Central.

The Royals have scored three runs or less in six of their last nine games, all of which have been losses.

The Cardinals ran into a buzzsaw this weekend, as they lost three of four to the team with Major League Baseball's best record, the San Francisco Giants.

Matt Carpenter extended in his hitting streak to fourteen games with a first-inning single on Sunday - the longest active streak in the N.L.

However, the Cardinals could only muster three other hits, falling to the Giants by a count of 8-0.

The Cardinals were outscored 23-11 this weekend, making this week's battle with the Royals that much more important from a statement perspective.

After Toronto Blue Jays ace Mark Buehrle suffocated the Royals offense on Sunday, not allowing a runner to reach third base in eight innings of work, the Kansas City Royals could do nothing but throw compliments his way.

Per Andy McCullough of the Kansas City Star, K.C. manager Ned Yost termed him as “a master at what he does."

While the Royals got their own great outing out of Jeremy Guthrie, giving up just two hits over seven innings, it wasn't enough on Sunday as the Royals fell 4-0 to the A.L. East-leading Jays.

"He matched up against the wrong guy," Yost stated bluntly.

The Royals hope they can find the right guys to face in these next four games with the rival Cardinals.

The renewal of the I-70 Series brings out the best from both the players on the field and the fans in the stands. Expect full houses in both St. Louis and Kansas City, as a playoff-like atmosphere should be the norm each of the four games.

Be sure to get your DVRs ready for Wednesday's opener in Kansas City, as Adam Wainwright (8-3, 2.32) looks to bounce back from a rough start against San Francisco, opposing the Royals' Jason Vargas (5-2, 3.39).

Vargas has given up just two earned runs in his last two starts.

What they are saying about the Cardinals:

Cardinals could trade an outfielder (Yardbarker)

What they are saying about the Royals: