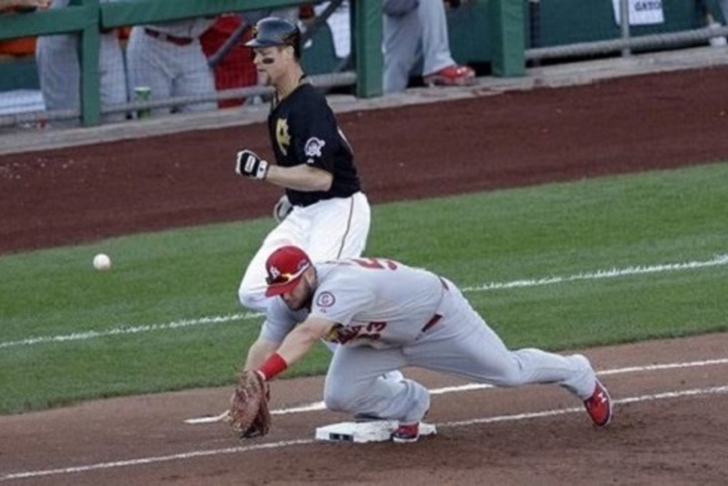 The St. Louis Cardinals are on the brink of elimination from the 2013 postseason and they have their defense, or rather lack thereof, to blame it on. Costly errors in both of the last two games have led to runs for the Pirates and ultimately wins for Pittsburgh over St. Louis.

In the seventh inning of Game Two with no outs it was a David Freese drop of a fly ball put aloft by Marlon Byrd that allowed Byrd to safely reach second base. Pedro Alvarez grounded out to move Byrd over and Russell Martin hit a sac fly to bring Byrd in. That run was one of seven for Pittsburgh that day, so it could be questioned as to how much it actually mattered in the long run.

Today's error will be looked back on as much more costly if Pittsburgh closes out the series tomorrow. The situation was the bottom of the first inning with two outs and Andrew McCutchen on first by virtue of a walk.

Justin Morneau made contact and the pitch deflected off Cardinals starting pitcher Joe Kelly. Shortstop Pete Kozma threw the ball away trying to get McCutchen at third and allowed Morneau to reach second safely. Marlon Byrd then singled in the next at-bat and scored both McCutchen and Morneau. Those two runs were huge in a 5-3 Pirates win.

Unfortunately for the Cardinals this became a pattern this season. While St. Louis was among the best in the league in avoiding errors, 63% of the 75 errors they did commit led to at least one run for the opposition.

In order for the Cardinals to stay alive tomorrow and force a Game Five back in St. Louis, they will have to not only get timely hits and quality pitching but avoid errors as well. Their ability to mentally recuperate after a defensive miscue has not been good.