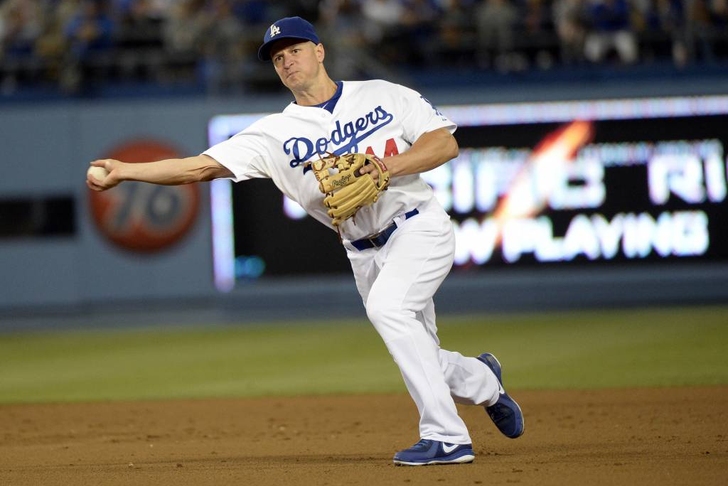 After the St. Louis Cardinals lost in six games to Boston in the grandest of stages in October, it became apparent that the organization’s two priorities in the offseason would be upgrading a pair of glaring weaknesses without shipping too much of their stellar young arms away that they are deemed the losers of a given acquisition.

GM John Mozeliak has accomplished that feat with gusto before you put up your Christmas tree, acquiring Peter Bourjos and Jhonny Peralta to upgrade the centerfield and shortstop positions, respectively. Oh and they still have Wacha. And Siegrist. And Martinez and Miller and Lynn.

And now the Cardinals insured their infield by landing free agent Mark Ellis – most recently with the Dodgers – on a one-year contract. Ellis will look to be inserted into the lineup primarily when Kolten Wong needs some mental breaks during what will be his first full season in The Show.

The National League’s best team of the century just got more powerful with a relatively low-key yet greatly impactful move in getting the veteran Ellis. Major League Baseball thought the Cardinals’ lineup of recent years was virtually eight players who can produce at any given time? 2014’s lineup card for St. Louis will be deeper than the Mariana Trench and scarier than the thought of the Astros playing in October.

Ellis, 36, is a perfect fit for the Cardinals in just about every foundation that The Cardinal Way is built upon. Not only is he a consistent hitter at the plate with a .265 career average in eleven seasons; he is also both experienced and competitive in the postseason. St. Louis fans shouldn’t see him as a replacement for Carlos Beltran, per se, but he does grind out tough and lengthy at bats, which St. Louis’ offense prides itself on. As far as character, the Cardinals see Ellis’ reputable positive attitude as one which will assimilate easily into the Cardinals’ clubhouse.

Another aspect of the Cardinals’ offseason wish list which made Ellis an attractive free agent was his stellar defense. Ellis is tops on Baseball Info Solution’s runs-saved rankings for all second basemen not named Dustin Pedroia.

Ellis is a great pickup for the Cardinals, one which fits this offseason’s themes of Mozeliak’s fantastic work as general manager: strengthen defense, insured offense, and little given away. For the three major players the Cardinals have picked up since playing their last game of the 2013 season – Peter Bourjos, Jhonny Peralta, and Ellis – they have only given up hometown hero David Freese, which the thinking Cardinal fan will tell you was a necessary move. In essence, the St. Louis has substantially upgraded all facets of their game at close to no expense.

The Mariners signed Robinson Cano to a deal worth the budget of Hollywood blockbuster. The Yankees look to give Carlos Beltran his best, and most likely final, shot at a World Series ring. The Rangers, Tigers, and various other teams have shelled out millions of combined dollars in ensuring trips to the postseason.

The difference with St. Louis' moves, and the reason they are quietly having the best offseason out of all thirty major league clubs, is their perfect storm of driven young pitching and veteran players who excel at the plate and with the glove. Not only does the addition of Mark Ellis greatly enhance the Cardinals’ short-term World Series aspirations, it also gives their younger players the leadership and veteran presence needed to help them identify the kind of player they strive to be in the long run. Checkmate. Your move, National League teams.