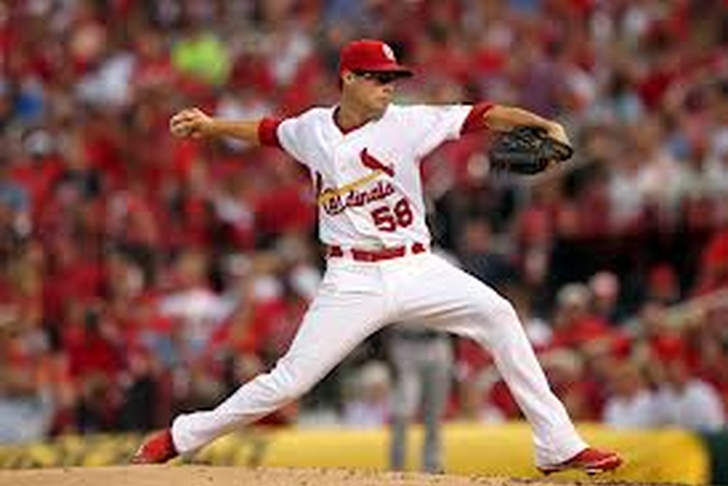 It was almost meant to happen, wasn’t it?

A Cardinal goes down early, and the organization must reach into its surplus of talent to replace him, fully expecting the replacement to meet the same level of production as the injured starter.

In this case, it is starting pitcher Jaime Garcia who came down with a case of the bad luck in the form of an inflamed shoulder. While there is no structural damage, Garcia received a cortisone shot on Wednesday. Suffice to say, the veteran will miss at least his first couple regular season starts.

This is Garcia we’re talking about, and this is major league baseball. That is to say, St. Louis fans shouldn’t be surprised if those couple of starts turn into a couple of months of Garcia on the DL.

So who does Mike Matheny turn to this year? Wainright, Wacha, Miller, and Lynn are already locks for the rotation, so that leaves the Cardinals manager with a couple of viable options.

The right-handed flamethrower represents the present and future of St. Louis’ closer position.

Rosenthal broke out last year in the midst of Jason Motte going down and Edward Mujica fading down the stretch and practically christened himself Cardinals closer with his near “unhittability”. In essence, he personified the Cardinal Way, being the next man up while being expected to be ready to perform at the major league level. Rosenthal simply took that to another level.

Rosenthal was expected to be closer again for the Cardinals this year, but has previously stated that he would relish the opportunity to show what he can do in the starter position. With Motte back on the mend and expected to return to the dominant form he was in prior to Tommy John surgery, Rosenthal might have his opportunity.

The toughest case against Rosenthal is that he doesn’t yet have major league starter experience, and the organization simply doesn’t see him as one in the present time. In his closer role down the stretch in 2013, he compiled a 2.63 ERA and racked up 108 strikeouts in just 75 1/3 innings. Among MLB relievers who pitched at least 50 innings, Rosenthal’s ration of 12.9 Ks/9 ranked sixth.

There is always the chance that Matheny experiments with Rosenthal as a starter for a game or two in Spring Training. However, this dominance is hard to duplicate over the course of 6+ innings, and Rosenthal is such a capable, dominant cog in the bullpen scheme that he probably won’t be considered seriously for the role of starter…yet.

Odds of filling in for Garcia’s spot in the rotation: 5%

[caption id="attachment_416" align="aligncenter" width="300" caption="Trevor Rosenthal was one of the Cardinals' young pitchers who made their presence known to the league last October."]

Martinez also enters 2014 having been an essential part of the Cardinals’ postseason run last year, as he played the part of feared set-up man.

What separates Martinez from Rosenthal is that the Cardinals expected him to fill the role of a starter when they acquired him, and they still do. Martinez arrived to Spring Training expecting to battle for a potential spot in the rotation.

With Garcia out for the time being, that task might have gotten a little bit easier.

Pitching coach Derek Lilliquist has already explained the intent to see what Martinez can do in the starter role as Grapefruit League play gets underway, possibly considering him for a starter spot if he exceeds expectations.

The Dominican native is better than his 5.08 2013 ERA suggests. As his performance in the postseason showed, Martinez performed when it mattered. 1-2-3 innings became the norm for him before too long.

The general line of thought from around the league is that Martinez will be an up-and-coming starter within a few years. With Garcia down, the National League might just have to prepare themselves a little early for another young Cardinals starter exploding onto the scene, a la Shelby Miller or Michael Wacha.

[caption id="attachment_418" align="aligncenter" width="300" caption="Martinez has the makeup of a dominant MLB starter, but has to yet to show off what he can do in that role."]

Cardinals fans are already well familiar with Kelly, even more so than Rosenthal and Martinez.

Kelly is the only one of these three candidates who has experience pitching at a starter level in the big leagues. Not only that, he has also been the go-to pitcher whenever it’s been “Cardinal Starting Pitcher Down” for the Cardinals, and has more or less thrived in the position of backup starter.

Kelly for the last two years has always been thought of as a bullpen regular. But because of his strong performances as a starter late in both the 2012 and 2013 seasons, he entered this Spring believed to be a leading contender in the battle for a rotation spot amongst the young pitchers. The fact that he isn’t already 100 percent a lock is simply another byproduct of the Cardinals having an embarrassment of pitching riches.

Kelly improved his game drastically over the 2012 and 2013 seasons, dropping his ERA from 3.53 to 2.69 in addition to garnering postseason experience in both years. One doesn’t have to be an expert to say that he is on track for even more improvement in his third year for the Redbirds.

Unless either Rosenthal – if he gets the chance – or Martinez thoroughly impresses the Cardinals staff in the coming weeks, expect to see Joe Kelly making the Opening Day roster as a starting pitcher for the first time in his career.

Cardinals fans already know the team would be in good hands, and sometimes that’s enough for the organization too.