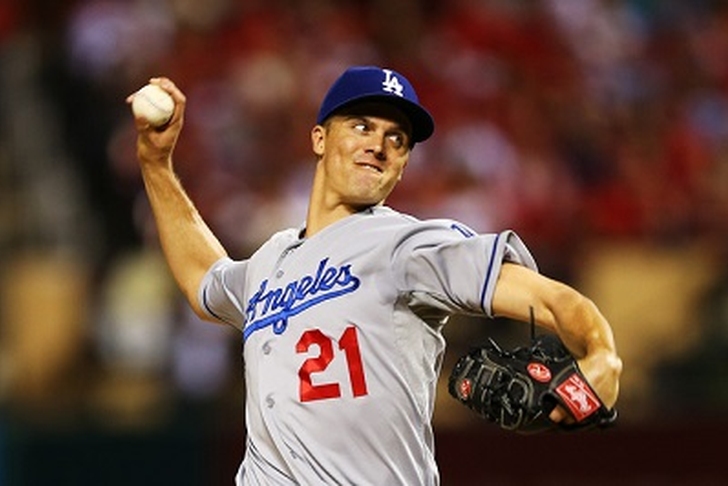 In October of 2012 the St. Louis Cardinals were up 3-1 in the NLCS over the San Francisco Giants, then the Giants' pitching staff held them to one run over the final three games of the series to move on to the World Series. Could the Cardinals see a repeat this season?

The Cardinals were successful tonight against the Dodgers' starter Ricky Nolasco, like they were in Game Four of last year's NLCS against Tim Lincecum. However, they won't see Nolasco again in this series, just like that was their lone sight of Lincecum starting last year. What St. Louis will see instead is three (if the series goes seven games) Dodgers starters that have shut them down.

Tomorrow night's starter for Los Angeles, Zack Greinke, held the Cardinals to two runs over eight innings and struck out ten in Game 1 of this series. Greinke had a 2.11 ERA at home in the regular season. If the Dodgers can stay alive tomorrow night and force the series to a sixth game in St. Louis, the edge for Los Angeles gets even better.

Game 6 could see the Dodgers starting Clayton Kershaw, who in Game 2 of this NLCS didn't allow an earned run in six innings. Kershaw also faced this lineup once in Busch Stadium in the regular season, going six innings and allowing two earned runs, making his ERA this season against the Cardinals at home a sterling 1.50.

If Greinke and Kershaw can pitch the Dodgers to a seventh game, it's possible that Hyun-Jin Ryu could take the mound for Los Angeles. In Ryu's start against St. Louis in Busch Stadium earlier this season, he didn't allow an earned run in seven innings. Add that to the fact that he didn't allow the Cardinals to score a run off him last night, and the Dodgers have a weapon.

These prospects are quite similar to what happened to St. Louis in the 2012 NLCS. After scoring eight runs off that short Lincecum start, the Cardinals faced Barry Zito, Ryan Vogelsong and Matt Cain.

In Game Five, Zito went 7 2/3 scoreless innings. Vogelsong repeated his numbers from Game Two of the series in Game Six, allowing one run over seven innings.  In Game Seven Cain didn't allow a run in 5 2/3 innings.

Closing out this series against the Dodgers' remaining rotation will be a tall order for St. Louis, just as it was against Cain, Vogelsong and Zito in 2012.