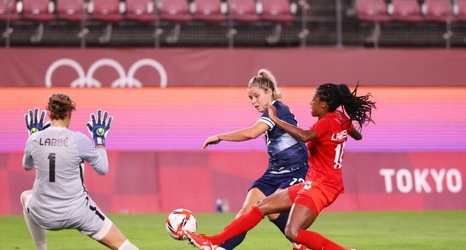 Early Tuesday morning former St. John’s soccer star Rachel Daly was once again in the starting lineup for Great Britain as the squad looked to lock up top spot in Group E against Canada.

Great Britain had to rally from behind after a header from Canada’s Adrianna Leon put the Canadians in front early in the second half.

Minutes away from seeing Canada overtake them and advance to the quaterfinals as the Group E winner, Great Britain was able to equalize due to an own goal by Canada’s Michelle Prince off a shot from Great Britain’s Caroline Weir.