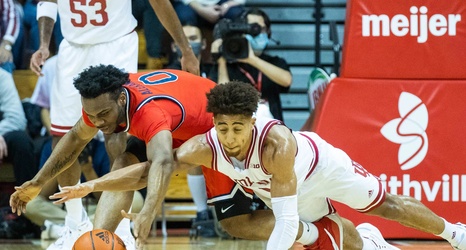 Are there moral victories? Or just disappointing halves?

St. John’s will look back on the missed opportunities in their 76-74 loss to Indiana, the first win for the Big Ten in this year’s Gavitt Games (a Big East/ Big Ten challenge week). St. John’s falls to 2-1 on the season, and have Fairleigh Dickinson up next on Saturday.

The Red Storm’s trip to Indiana’s Assembly Hall revealed some work to do for the team, but also showed some of their talent against a Hoosier team that brought physicality and defensive quickness to what became an extremely intense game.