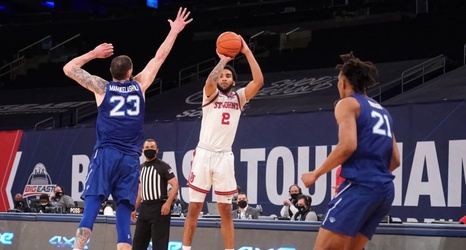 St. John’s basketball forward Julian Champagnie is off to the NBA Draft Combine.

It is crunch time for college basketball players to make a decision regarding their future, whether that means returning to the amateur ranks or heading to the NBA and St. John’s basketball sophomore forward Julian Champagnie is right in the thick of it.

July 7 is the deadline to make an official decision by the Big East Conference’s Most Improved Player landed an official invitation to the NBA Draft Combine and just completed a workout with the Boston Celtics on Wednesday afternoon.