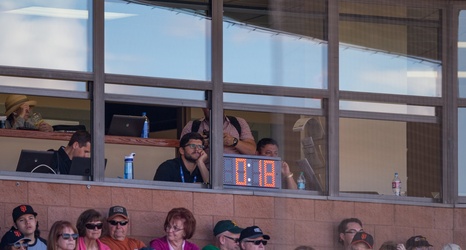 Major League Baseball has used timers in between innings to speed up the game. An augmented reality app aims to take advantage of baseball's built-in breaks. (Photo by Rob Tringali/Getty Images)

Virtex Arena, an augmented reality app designed to fill the downtime during live sporting events, uses a 3D model of the stadium to overlay games onto the field directly in front of a viewer’s seat. The football version of the app debuted earlier this year at the Super Bowl, but its makers have their eyes on a bigger picture — the built-in breaks inherent to baseball.

“There is a natural cadence of the game present in baseball that is different from football,” said the app’s founder and developer, Jeff Green.