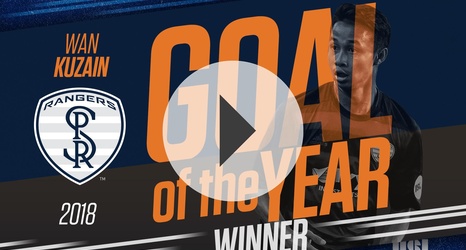 The people have spoken (and voted): Wan Kuzain Wan Kamal’s wonderstrike is the absolute best of the bunch.

Kuzain secured USL Fans’ Choice Goal of the Year honors on Friday for his brilliant free kick in the Swope Park Rangers’ 2-1 win over Tulsa Roughnecks FC on Aug. 29 at Children’s Mercy Park. The SPR and Sporting KC midfielder beat out San Antonio FC’s Alex Bruce in the final round of fan voting on USLChampionship.com to seal the award.

The 20-year-old’s dipping strike against Tulsa landed him on SportsCenter’s Top 10 for the second time this year and ultimately helped the Rangers to their third consecutive appearance in the USL Cup Playoffs.