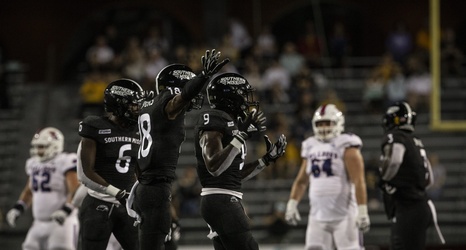 After two postponed games, Southern Miss returned to play for the first time in three weeks against Liberty University. The Golden Eagles showed its rust, though, and failed to contain the Flames’ passing offense, which resulted in a 35-56 loss.

Assistant Head Coach Tim Billings took over coaching duties for Interim Head Coach Scotty Walden, who was unable to travel with the team due to a positive COVID-19 diagnosis. Southern Miss was also without quarterback Jack Abraham and key players such as receiver Tim Jones, who last played against South Alabama Sept. 3.

Despite the challenges, Southern Miss had an early lead.