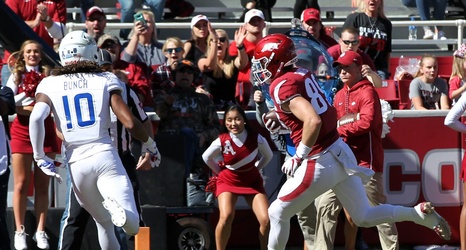 SEC talent is headed to Hattiesburg.

Former Arkansas tight end Grayson Gunter announced his decision to transfer to Southern Miss Friday morning on Twitter. It will be the senior's final season of eligibility.

In 12 games of action in 2019, Gunter reeled in six catches for 55 yards and a touchdown. He has appeared in 28 contests in his first three seasons at Arkansas.

The 6-foot-6, 243-pound athlete is a graduate of Madison Central High School. In high school, Gunter was rated a three-star prospect and one of the highest-ranked tight ends in Mississippi.

According to NBC Sports, Gunter is a graduate student who is immediately available to play with the Golden Eagles.