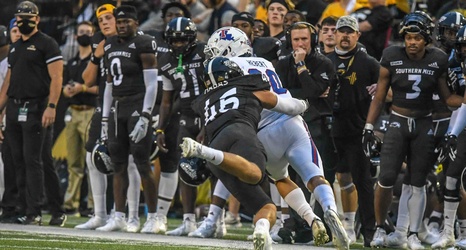 HATTIESBURG — Scotty Walden’s first loss as a Division I head coach was about as heartbreaking as it could’ve been.

Southern Miss led by as many as 17 points in the second half but Louisiana Tech came all the way back and scored on a 4th-and-goal with less than 20 seconds remaining to win a 31-30 nail biter. With the loss Southern Miss falls to 0-2 on the season and 0-1 in Conference USA play. Louisiana Tech is 1-0.

The Golden Eagles built their early lead thanks to a quick-strike offense. The Golden Eagles scored touchdowns on the first play of a possession twice and benefitted from good field position throughout the second and third quarters.