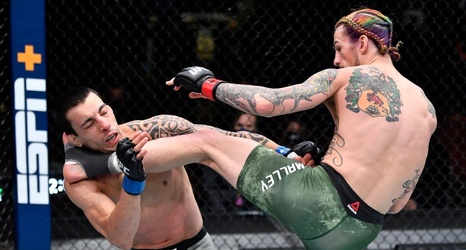 Sean O'Malley came into Saturday's bantamweight fight with Thomas Almeida with first-round finishes in eight of his 12 wins. He apparently thought he had another.

Midway through the opening round of the UFC 260 main card bout in Las Vegas, O'Malley wobbled Almeida with a left knee to the chin, then sent him collapsing against the cage with a straight left hand. Then O'Malley walked away.

But the fight was not over. Referee Mark Smith did not jump in, and the durable Almeida climbed back to his feet.

It was a mistake by O'Malley (13-1), but all it did was give fans several more minutes of watching him perform masterfully before the 26-year-old from Phoenix, Arizona, scored a third-round knockout to bounce back from his only loss.