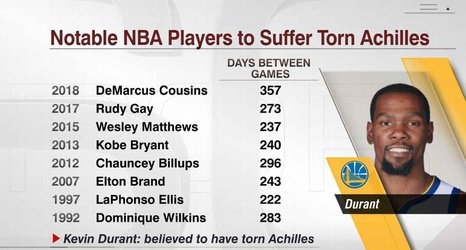 Warriors star forward Kevin Durant flew to New York City on Tuesday and was set to undergo an MRI on his injured Achilles, sources told ESPN.

League sources previously told ESPN's Ramona Shelburne and Adrian Wojnarowski that the team believes the MRI will confirm an Achilles tear that Durant suffered in Golden State's 106-105 win over the Toronto Raptors in Game 5 of the NBA Finals on Monday.

The Warriors, who returned back to Oakland, California, on Tuesday, are expected to announce the results of the MRI either Tuesday night or Wednesday.