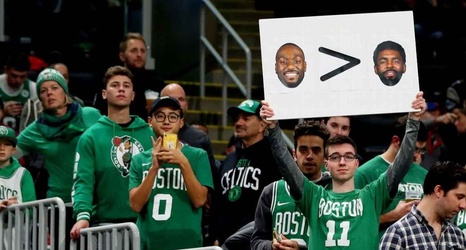 BOSTON -- No time was wasted. As the lights dimmed and the player introduction video began to roll on the Jumbotron in TD Garden, the heckling began. The chants were loud, the booing was relentless, and signs denouncing the Boston Celtics' former star were abundant.

The target of the taunting, Kyrie Irving, was hundreds of miles away from TD Garden. Irving, who has missed the past seven games because of a right shoulder impingement, did not make the trip to face his former team. The rest of the Brooklyn Nets' players served as Irving's proxies.