'One of the worst own goals of ALL TIME': Mohammed Salisu is ridiculed by fans after prodding home a comical own goal in Southampton'sby Tottenham as they are left baffled by his 'absolutely shocking' gaffe 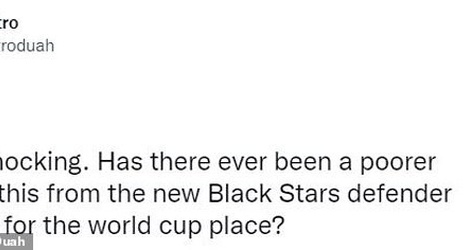 Mohammed Salisu has been slammed on social media for a disastrous own goal which was the third goal Southampton conceded in a 4-1 defeat at the Tottenham Hotspur Stadium.

The Ghana centre-back mistimed his clearance in the 61st minute, and the ball ended up in the corner of the net.

Salisu's error has made its way to social media, where people have less than kind to the 23-year-old - and his hopes of representing his country at the World Cup.

Absolutely shocking. Has there ever been a poorer miscue than this from the new Black Stars defender who's aiming for the world cup place?